0 Darts on Target for New Home 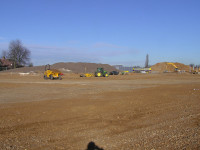 Dartford FC are on course to be playing their football in a brand new, purpose built stadium and training facilities at Princes Park, Dartford after the appointment of Active Leisure Contractors to construct the new training facilities.

Jackson Construction netted the £6.5 million project from Dartford Borough Council to build a high specification 4,000 capacity football stadium for Dartford Football Club in Kent and Active Leisure Contracts were chosen to build the training facilities due to their knowledge to construct FIFA approved artificial playing surfaces.

The Southern League Division One East club had been previously ground sharing with Gravesend and Northfleet FC at Stonebridge Road for the past 14 seasons.

Firstly, a base formation was formed and then laser graded to comply to F.A standard for pitches in the community. A heavy duty polyethylene membrane with heated sealed edges was then laid between two protective fibrous membranes and laid over the entire site whilst also lining the perimeter drainage ditches. 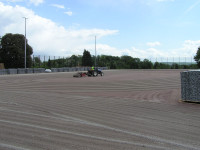 Drainage composite strips were then laid over the membrane to channel water to the perimeter ditches and from there to storage ponds with the purpose to conserve water for use on the natural stadium pitch.

A base was then constructed with self binding gravel to form accurate levels and a pre-fabricated shock pad with FIFA and UEFA approval from Dutch based company, Schmitz Foam was laid.

In this case a Poligras NF57 synthetic surface was laid and then an infill of 25mm sand and 25mm rubber spread and brushed throughout the site.
The flagship development, which forms part of a major regeneration drive within the borough started in mid-November, with completion scheduled in time for the 2006/07 season. 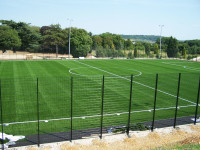 The ground has its own dedicated Fastrack stop and is only a short walk from Dartford Town Centre so local fans will be able to leave the car at home.
The terraces are fully covered by an innovative green 'living roof' designed by architects Alexander Sedgely which provide a dramatic backdrop to the action. "Once completed, Dartford FC's new high specification ground will not only prove an excellent sporting venue, but also focus community aspirations and spark continued regeneration within the area" commented Jeremy Kite, Deputy Leader of Dartford Borough Council.

Kite continued "We are delighted to be working with Jackson and Active Leisure Contracts on this once in a lifetime project'. After fourteen years in exile, Dartford Borough Council is bringing the Darts home in style.

For further information on the full range of products available, please visit www.activeleisurecontracts.co.uk or call 08700 500 902.