by Charmian Robson
in Machinery & Mechanics
on 17 Feb 2016

After 20-years of using the same tractor, originally purchased from Campey Turf Care Systems, a £10,000 grant from the Premier League and FA Facilities Fund has provided the means for Daten Football Club to upgrade their maintenance equipment for use at Culcheth Sports Club, Warrington, where the amateur team play their home games. 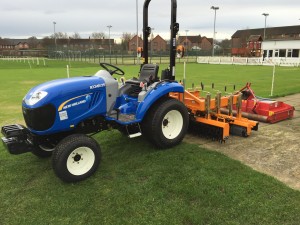 In the place of their ailing tractor and select few attachments the club were able to get state of the art machinery in the form of a New Holland Boomer 25 Tractor with a Trimax Striker 150 and a Sisis Quadraplay.

Culcheth Sports Club is maintained by groundsman, Ian Trantum. Ian has been working on the site for 30-years, and made the original tractor purchase some 21 years ago.

Having got more use than could possibly have been envisaged from the equipment in the intervening years, Ian was aware it was way past time for an upgrade from the metal seated machine that had served him so well. And with such proven reliability he was happy to work with Campey again.

"I bought the old tractor from Campey twenty years ago," he explained.

"And even then it was second hand, but it was state of the art for a compact tractor at the time. However, they've moved on a lot since then - it's like going from a Vauxhall Viva to a Ferrari!

Given the limitations of the funding Ian Campbell, UK & Ireland Sales Manager for Campeys, was able to advise on the most cost effective tractor and implements to ensure maximum improvement and maintenance benefits to the club.

"This new equipment is going to make my job a lot easier and it's also going to improve the pitches a lot and that's the most important thing for us.

"Up until now all we had for working on football pitches was a set of old spikers and a drag chain, so the tractor and attachments will make a massive difference."

Adverse weather has meant Ian hasn't been able to fully utilise the Trimax Striker 150 and Sisis Quadraplay, barring one outing of the Trimax mower. Now he is looking forward to starting work with the new grant funded equipment as soon as he can.

Along with the new equipment Campeys have also continued their support of grass roots football by sponsoring the kit for the Daten FC Vets team until the end of the 2016-17 seasons, with the team currently top of the Cheshire Vets league.

The Premier League, The FA and the Government - via Sport England - fund the Premier League and FA Facilities Fund, which is delivered by the Football Foundation, who are the country's largest sport charity.

Working with the Lancashire FA, Daten FC was able to secure a grant of £10,000 towards the equipment while the remaining balance was raised by the football club.

The money was secured through the work of Stuart Nightingale, chairman of Daten FC and club member Donald Borland. Speaking about the impact of the new machinery Stuart said: "These modern, purpose built machines and accessories will enable us to maintain the pitches and help us to attract new players and to secure the club for a good number of years."