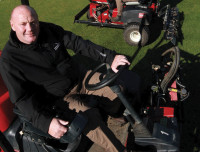 "For me to hear that our members and visitors are happy with the course is what the job is all about. It's what we are all focused on here"

As Davy Cuthbertson finally prepares to take a sip of his coffee at Rockliffe Hall, there is a flurry of activity and a whirr of satisfaction that sees a smile spread across his face as a group of eight North-East businessmen stride towards their clubhouse table following a round of golf. It is impossible not to overhear their plaudits for the region's most celebrated new course and, as Davy is Rockliffe Hall's Golf and Estates Manager, that chorus of approval was the ultimate seal of approval.

"For me to hear that our members and visitors are happy with the course is what the job is all about. It's what we are all focused on here," Davy said. "It's the be-all and end-all and makes all the hard work worthwhile."

Davy heads a team of thirteen full-time staff who work around-the-clock, from before dawn 'til after dusk, throughout the year, tending the picturesque course that is perched on the northern banks of the River Tees which divides County Durham with neighbouring North Yorkshire.

In taking on the club's key position at Rockliffe Hall three years ago, he accepted the challenge that came to turn the course into the North of England's foremost golf destination.

"Here, there is a stunning five-star hotel with great rooms, wonderful restaurants and a vast spa. They want a golf course to match it," Davy added. "People who succeed here are those who can't wait to get the place recognised. Top greenkeepers, such as Pete Newton, who came from the Belfry, and Jon Wyer, who came from the Forest of Arden, courses which have held large tournaments nationally and internationally. I've always liked a challenge and this is the biggest I've taken on. That's why I'm here."

Since Davy picked up the gauntlet at a course masterminded by Rockliffe Hall chairman Warwick Brindle, award-winning course designer, Mark Westenborg from Hawtree, and consultant agronomist George Shields, he has had to use his many years of experience to keep the course heading in the right direction. 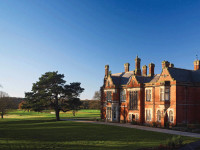 And how! He has had to use all his know-how, because there are all sorts of natural and man-made issues, from the choice of grass more suited to the sunnier climes of the United States for the greens, to dealing with floodwater from the Tees.

That means this family man has to be on the top of his game at this course, next to the acclaimed Middlesbrough Football Club Academy, just south of the village of Hurworth in County Durham.

Bearing in mind that the area, up until just four years ago, was once used for farming, that is no easy task, but Davy and his team are leaving nothing to chance in their quest to establish Rockliffe Hall as a leading course.

"The golf course used to be purely farmland; sheep and an array of crops. Those crops, especially, were always going to be difficult because, no matter what you did, the crops that had been grown there would still be trying to regrow, regardless of what you did with the soil," Davy explained.

"That is especially the case with us in a northern climate, because you are always going to get a lot of weed grasses coming through when it is cold, and the seeds that we want to grow can be a little slower to take."

"Good grass comes in second and, therefore, growth rates are difficult to control. For areas such as fairways they can appear 'speckly' because the undesired grasses are growing at a quicker rate than the preferred grasses that we are really after. Initially, aerating the soil gave it extra life and, so, seedlings from past crops, as well as unwanted weed grasses, were always going to come through. That needed treatment before a ball was struck on the course."

So, it is a good job that Davy had so much experience under his belt from his days at Durham's South Moor club, and then Slaley Hall in Northumberland, when he answered Rockliffe Hall's call.

"I was hit by the golf bug in my last year at school and I started playing with two mates. We realised being on the course was a lot better than just messing about and standing on street corners," Davy added.

"The reason I went to work at my local club, South Moor, after school was to get a membership. The only way in was if you worked there, so it was a no-brainer once a job as a trainee greenkeeper came up.

"In the early days it was simple stuff, like raking bunkers and strimming; all the little menial tidy-up jobs, jobs that are very important nevertheless, and then, once I'd learned the ropes, I did everything, using every machine and progressed rapidly."

"Now I'm in charge of everything on a beautiful estate like Rockliffe Hall. It's very difficult to play now because I have a family back home and have plenty to be busy with. I do try to get out there now and again. Usually ,three holes to test the course and see it from the golfer's point of view. That is important. You can appreciate a green's nuances much more if you hit a few putts on them."

Davy spent eleven years as the second man in charge at South Moor before heading to Slaley Hall where he spent another eleven years - seven as second man and four years as head man - before moving down the A1 to Rockliffe Hall just as the construction of the first six holes were nearing completion.

The fact that the club had decided to use creeping bentgrass A4/G6 for their greens illustrated just how ambitious the owners were when it came to the golf course.

"It was like a statement of intent, because good golfers like good greens and good greens are fast greens, so that is the reason you pick this sort of grass," Davy said.

"Greens dictate how good you want the golf course to be, while tees and fairways are a close second. Greens are the one thing that golfers remember. If golfers have good day on the greens, they are happy. They can play rubbish but, if they sink putts, they are content."

"It was ambitious to go for a grass that some might deem unsuitable for this neck of the woods, but it underlined their intent in a big way. When you look at the 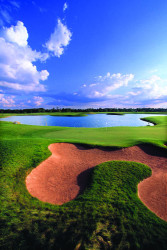 biggest tournaments, they always have very quick greens and, to replicate that, you need species of grass that grow laterally, so you get them tighter and shorter."
That is all well and good for the golfer, yet it means that the greens had to be given plenty of TLC by Davy and his team because that A4/G6 blend is generally associated with warmer climates than County Durham.

Davy continued: "Very few clubs in the UK use that mix, mainly because they are from America and are warm-season grasses. They like heat, so the hotter it is the better they grow. That is the biggest challenge here because, as far as I'm aware, we are the only course this far north that uses this mix in England."

"So how do we make it thrive? They don't like a lot of harsh treatment. By that, I mean the type of treatment which could constitute normal treatment at any other course anywhere in the UK."

"You've got to pick them [greens] up by brushing with small brushes mounted onto the pedestrian mower, as well as standing the leaf up via a grooming system on all the mowers. There are little teeth that pick up all the grass plant, so the leaf is lifted ever so slightly. And, there is a nice clean cut that helps promote the growth, health and green speed. They need a gentle touch; a flick, because they don't like aggression."

"Anything heavy is not appreciated. You have to be gentle and, when you are, the rewards are clear for all to see. The grass creeps sideways, whereas normal grass grows straight up. It is great, because it makes for a tight, slick green."

On a daily basis, Davy has up to six men tending the greens with their 'soft touch' pedestrian mowers, and they even change the holes on every second day. "Golfers appreciate different challenges plus, the more you move it the better it is for the grass, so it is a win-win situation for all," he added.

"The weather is also a factor. It's no surprise that the further north you head in the UK, the bigger the challenge in terms of weather conditions. There is very little we can do regarding the weather - we are in the lap of the Gods.

"If it's windy for three weeks, then you can't fertilise or spray for three weeks. So, you have to make the most of the opportunities you get. But, then again, we have seen around here the wind has a tendency to drop around tea-time, so you can get stuck in then, or get in early the next morning. The guys are used to long days and waiting for the opportune moments."

"It's very much a microclimate because it is a windy site and most of the rain seems to bypass us. It can be tipping it down just a few miles away in Darlington or Northallerton, and we are sat here dry as a bone."

The weather might make life tricky for the team, but they also harness it when the Tees reaches flood point. The intricate drainage system around the fairways, coupled with a number of raised greens and tees, means flood threats are kept to a surprising minimum when the rains do come. 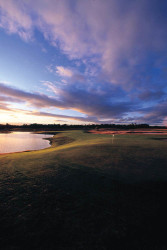 These conditions, coupled with the course's location nestling, in parts, on the banks of the River Tees, mean Davy is quick to rubbish allegations that a new course is a threat to wildlife.

"Since we've arrived here, it has led to a whole plethora of wildlife. We have nesting geese and swans, cormorants, great crested grebe, herons and gulls all complementing the existing wildlife such as rabbits, hares, badgers, deer, and squirrels."

"It means there is healthy combination of birds and wildlife, which was part of the vision. Rockliffe Hall wants a retreat working in harmony with its country surrounds. It's surprising how many complimentary comments come in from golfers about the wildlife."

Rockliffe Hall was in the spotlight recently, when the great and the good of North-East football congregated at the club for the Sir Bobby Robson Foundation Golf Day, and Davy is confident that he can set the stage for more high-profile events on the championship course in the near future.

"I have no qualms about the ability of our course to host a big competition and the interest is definitely there. I know we have the know-how to make sure the course would be ready for a big tournament," Davy said. "The course is quite young and is in the process of developing, but we could easily host something big here very soon."

'Watch this space' seems to be the message from a man who has been watching Rockliffe Hall very, very closely over the last two years.