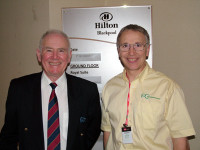 Unusually for a Scotsman, Walter has a passion for cricket. He enjoys watching the sport at every opportunity.

"I thought the recent Ashes Test was brilliant, plenty of drama and skill from both sides. I have always been fascinated and interested in the game. It started way back in the late 1960's when I emigrated to England to work in Nottingham, at Stanton on the Wold Golf Club. It was during this period that I had the opportunity to go to Trent Bridge and see exciting cricket being played by teams such as the West Indies. In those days the touring sides also visited a number of golf clubs in the area for relaxation. I had the good fortune to meet the legendary Gary Sobers, who I found to be the most humble and modest persons I have ever met. He was as good with the golf club as he was with his bat. We played on several occasions and he always was able to drive a ball 40-60 yards further down the fairway than me.

My Greenkeeping career started at home in Scotland at a small nine hole golf course called Tillicoultry in Clackmannanshire. I then moved to Nottinghamshire to work at Stanton on the Wold Golf Course in 1968 and, three years later, on to the Hollinwell course, Notts Golf Club near Mansfield, a championship standard course with members who expected quality facilities.

I learnt a lot at Hollinwell, we set ourselves high standards. In those days we didn't have greens committees or captains that bothered us.

I often go back there now and see what changes they have made. As with most golf courses today the standards of course preparation and maintenance have improved greatly due to the advances in machinery technology and the education of greenkeepers.

The start of this revolution began in the mid 1970's and coincided with my appointment as Head Greenkeeper at St Andrews in 1974. There were some major developments in machinery, triple mowers appeared on the scene, hydraulic driven mowers for fairways instead of trailed gangs, automatic irrigation systems were introduced. And thanks to Jimmy Macmillian, who introduced me to the vertidrain, the possibility to deep aerate greens and tees quickly without disruption helped us produce better quality playing surfaces.

During my twenty years at St Andrews I was fortunate to witness many changes, golf was becoming more popular, television coverage was increasing, so there were greater demands for better standards as the whole golfing world tuned in to see the British Open Golf championships.

Also at this time I became involved with Elmwood College, looking to employ and offer young aspiring greenkeepers an opportunity to learn the skills of the trade at St Andrews. The better educated they became, the better skills they had to offer when working as crew on the course, it was a great learning environment for us all. When the major tournaments came to St Andrews I was able to call on these students and staff from surrounding clubs to help prepare the course.

My fondest memories have got to be the four Open championships I prepared during my time there, all very different. The first in 1978, when Jack Nicklaus won, we were all really quite naïve then, however we managed to get the course to perform its best, given the resources we had at that time.

The 1984 Championship was rather different, there was not a lot we could do other than try to save the course because the weather was so hot. The course burnt up, and our main aim was to keep the greens alive. The conditions, being fast and hard, suited the winner, Seve Ballesteros.

In 1990, when Nick Faldo won, we had the rub of the green. The weather had been perfect and the course was in a fantastic condition, probably the best conditioned golf course I have ever seen in my life, it was exceptional. We managed to get everything in place, the timing, the machinery and the manpower. It all came together for that tournament.

My last major tournament at St Andrews was the 1995 Open, the year I retired from greenkeeping, and we had yet another challenging course as, again, the weather dictated the condition of the course. It was hot and dry, which suited another long hitter, John Daly, who won in front of a record crowd of 250,000 people.

I am now in my tenth year of retirement, if you can call it that. In fact, I have been kept rather busy in many ways, having consulted on a number of course constructions and advising on the European Golf Tournaments, which has enabled me to travel a lot. I have always attended the GCSAA show in America, a valuable source of knowledge and information. 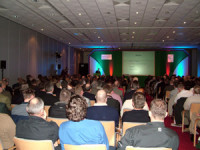 I still manage to play golf regularly, maintaining my golf handicap of 5, at the nearby Kings Barns club, a course I had the pleasure of being involved with during its construction and growing in period.

The golf industry over the years has served me well, especially all the friends and acquaintances I have mader during the last thirty years. I see it as one of the most rewarding jobs anyone can have, the challenges you face every day are immense and, at times, very stressful but, in the main, the rewards are fantastic.

The fellowship and comradeship within our industry is unparalleled. It is clearly evident at the Harrogate show when the industry meets for a week, sharing ideas and discussing opportunities to improve the golf industry.

I don't suppose, at my age, I would want to change my way of life. It's been very good to me in every respect. I still try and play as often as I can and, being a life member of St Andrews, enables me to keep in touch with the greenkeeping staff and the latest developments.

I also like to try out the latest in equipment developments, clubs and balls, to see how they can help improve my game.

However, we must not lose sight of the importance of greenkeeper training and education. BiGGA over the years has been very successful, with the aid of the Greenkeepers Training Council (GTC), in promoting successful education programmes throughout the UK. It is so important for the industry. Where else will we find the next generation of Head Greenkeepers to sustain our wonderful game?"

I never got to find out Walter's favourite TV programme or film, I don't think he has the time. Golf seems to fill his life as much today as when it did when he started all those years ago.