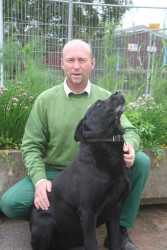 With the number of students attending the college increasing fourfold to 1800 between 1981 and 2007, I have witnessed a marked increase in the demand placed on the services I offer, and these stringent work commitments have made any days off an infrequent occurrence at the best of times.

However, as my long-term marriage to Sandra approaches its silver anniversary this September, the independence of my three 'children' (Sam, Marie and Joseph, aged 23, 21 and 19) has ensured minimal constraints on my free time when it comes to dealing with family matters, although I regularly enjoy the company of my black labrador, Evil (who incidentally never has a day off!).

A regular player of squash, I have put my efforts concerning the campus' sports pitches to the test in organising, coaching and managing a football team of local 18-20 year-olds, a tremendous bunch who have recently been granted entrance into the Telford Sunday league ladder as reward for their (and dare I say my own) efforts.

While an avid dislike for television otherwise limits my options outside of work, I will willingly listen to music of almost all genres. I would quite happily sit and watch the performances at Glastonbury on the television all day long, although the commitments of my job have rather put the dampeners on that idea!

However, with the time spent maintaining the grounds of the college having such an emphasis on the management of my own time, I suppose that it's no surprise that my main hobby is work-related. I have long been a keen grower of many different vegetables, and have spent many of my days off striving to boost my reputation in the world of horticulture.

My status as one of the few qualified judges of exhibited vegetables in the West Midlands has also endowed me with the privilege of travelling the length and breadth of the British Isles inspecting the quality of produce at both ends of the national spectrum - from local village fetes to the National Vegetable Society Show. I have been there and done the lot over the past few years.

I have also developed my own personal preferences over time. Given the choice of a vegetable to take to a desert island (an unusual concept, I know!), onions would be my pick for the quality and excitement that they offer when grown for exhibition purposes (although nothing matches cauliflower for eating).

Although becoming established in a job offering little in the way of free time has prevented me from giving it all the attention I could, the pleasures of vegetable growing as a whole has offered me a marvellous blend of thrills and spills over the past few years, with global recognition surely awaiting in the future (?)