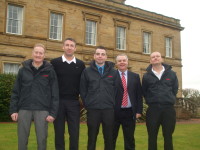 Following a year which saw a number of high profile events visit De Vere's championship courses across the UK, greenkeeper Alan Glen from The Carrick on Loch Lomond has been recognized as the groups 'Greenkeeper/Mechanic of the Year'. Competing against fellow greenstaff and mechanics from De Vere venues across the UK, including Slaley Hall, Wychwood Park and Heron's Reach, Glen's involvement in the drainage and bunker works at The Carrick as well as his professionalism and hard work, led him to lift the prize. Following course developments undertaken in the last 12 months The Carrick enters 2011 in its best ever condition.

"It's an honour to have been awarded De Vere's green keeper of the year award," commented winner, Alan Glen, who will benefit from a complimentary visit to the Golf Industry Show in Orlando, Florida as part of his prize. "It has been a fantastic year for De Vere venues across the country, hosting some great tournaments, so I'm delighted that the hard work and progress at The Carrick has been recognized. We have a fantastic team at the resort and I'm really looking forward to being a part of the course developments as it continues to mature in the coming years."

Also short-listed for the award were mechanics Mick Robson, based at De Vere Slaley Hall and Steve Crisp from De Vere Dunston Hall. Following nominations from all 11 De Vere venues, the three finalists were invited to the luxury Oulton Hall resort for interviews with the awarding panel including Daniel Hodson, De Vere Golf and Leisure Director, Jim Brown, De Vere Group Golf Course Manager, and Trevor Chard, from The Toro Company, which sponsors the award.

"I am absolutely delighted for Alan, who faced strong competition from finalists, Steve and Mick," commented Jim Brown, De Vere Group Golf Course Manager. "I am sure Alan will gain invaluable experience during his trip to the Golf Industry Show, which he will be able to bring back to his post at The Carrick. His hard work and professionalism has been invaluable in helping The Carrick achieve its targets in the last 12 months, and we look forward to helping Alan continue to develop his skills in the future."

With championship golf returning to a number of De Vere Golf Resorts in 2011, including the De Vere Club PGA Seniors Championship at Slaley Hall in June, the first-class staff and greenkeepers at De Vere are central to maintaining its superb reputation as the leading golf resort and hotel group in the UK.

The De Vere 'Greenkeeper / Mechanic of the Year' is held in association with Toro and annually recognizes the leading figures from De Vere's greens and maintenance staff who are not at management level.