To mark the 30 year relationship between Allen Power Equipment Limited and their American supplier National Mowers, over 60 dealers and users 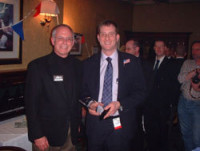 celebration at the George Hotel in Harrogate, after the close of the BTME show on Tuesday evening 20th January.

Many dealers who attended have sold National mowers since their introduction into the UK by Allen in late 1973. Greenkeepers at the event were advised of the competition Allen are holding to find the oldest working National 68 in the UK.

National Mower President Stan Kinkead will present the winning owner with a brand new 68 at the Saltex show in September. The American style gathering in Harrogate also witnessed Stan Kinkead (Left) present Allen MD Peter Bateman with an award recognising the success of the 30 year association.