by External source
in Cricket and People
on 05 Jan 2017 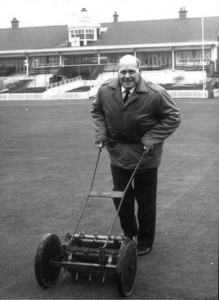 Walter Goodyear was the club's head groundsman and joined the staff at Queen's Park in Chesterfield, close to where he was born in Hasland, at the age of 14.

Promoted at the age of 16 to become the head groundsman at Chesterfield, he moved to the Derby ground, off Nottingham Road, in 1938, at the age of 21.

By the time he retired in 1982, Mr Goodyear had served the club for 50 years - something that was recognised when he received an award for his outstanding contribution in 2015 from the club.

The war interrupted his career for a while, when he joined the Army and saw overseas service in Alamein, Baghdad, Tunis and Anzio, reaching the rank of sergeant, before returning to Derby where he then served the at the County Ground in Derby for the next 37 years.

You can read the original article from the Derby Telegraph HERE