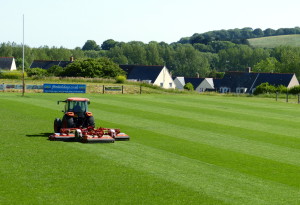 Trimax Mowing Systems will be showing a UK-built Pegasus wide-area roller mower for the first time at IOG SALTEX 2013.

Previously manufactured solely in New Zealand, Pegasus is the company's best-selling mower world-wide over the past 20 years. It entered production in the United Kingdom earlier this year, joining the company's FlailDek FX out-front mower deck which has been built in Britain since spring 2012.

The Pegasus has been replacing cylinder mowers in contracting and amenity environments due to its low-maintenance requirements and ability to cope with longer, heavier grass conditions.

Currently, Trimax mower models manufactured in the UK are the FlailDek FX in 1.35m, 1.55m and 1.85m cut widths, and the Pegasus Series 3 with 4.93m and 6.10m cut widths. Both Pegasus models can be specified in Classic or ILS versions, the latter featuring push button electro-hydraulic independent lift of one, two or all three rotary cutting units on the move from the driving seat.

An interesting manufacturing fact is the adoption of a special resin-based polymer undercoat for every UK-produced mower, giving greatly increased corrosion resistance and machine longevity.

Alongside the UK-built Pegasus and FlailDek FX mowers to be featured on the Trimax stand, visitors will also be able to see the Striker multi-spindled rotary mower and the brand new hydraulic drive FlailDek for the Toro GM3400.

The extension of UK manufacturing by Trimax further reinforces its commitment to its dealers and end-users throughout the UK, Ireland and western Europe, while reaffirming the company's confidence in the reliability and excellence of the UK manufacturing sector.

Karl Stevenson, Marketing Manager for Trimax said: "We're committed to investing in UK manufacturing so our customers can benefit from locally produced and supported products."