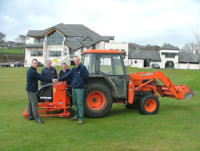 Like many other clubs in Northern Ireland, Ballycastle specified their machine with hydraulic depth control. Course Manager Nick Webber explains the reasoning behind this decision saying, "We have varying depths of rock under our fairways and the hydraulic control means that the operator can adjust the depth without leaving the cab. This aids productivity and also protects the machine."

Nick, who was previously at Portstewart Golf Club, joined Ballycastle just over a year ago. Previous aeration had been undertaken by a contractor and it hadn't been deep aeration.

"We found that using contractors was becoming more expensive and you had little control over the aeration programme. Also the machine our contractor used did not penetrate deep enough," he added. "We have been using solid tines on the greens at varying depths and have achieved depths of 250mm in some cases.

The greenkeeping team of six used the XP as part of their rigorous regime preparing for the Bushmills Malt Causeway Coast Tournament. Ballycastle Golf Club is one of the four courses where the biggest open amateur event in the world is played each June.

The Ballycastle 18-hole course is part links and part parkland, and is bordered by the Margy and Carey Rivers while the remainder runs alongside the beach with panoramic views including the Mull of Kintyre, Rathlin Island and Ballycastle Bay.

It opened as a 9-hole course in May 1891 and in 1925 a further 9 were added. The final layout has remained basically unchanged until the present day. In 2003 the clubhouse was extensively modernised and rebuilt providing some of the finest facilities in Northern Ireland.