Sport is a vital part of life at Moulsford Prep School in Oxfordshire and the boys' preparatory school has a well-deserved reputation for playing outstanding rugby. It follows that keeping the extensive playing fields in top condition is a priority. Whilst the pitches have a good topsoil layer over clay and enjoy a gentle slope towards the River Thames, compaction of the surface had led to large areas of standing water after heavy rainfall. "The problem became compounded with the extent of play," says Tom Wigley, Head Groundsman, "particularly with the pitches for the younger boys, the seven, eight and nine year olds, who tend to group around the ball compared to the 'Colts' and Seniors." Many small boots pounding the same area leads to compaction, then mud with the standing water and that in turn allows weed growth as the grass recedes.

Having read an article on a similar problem solved by Terrain Aeration's deep penetration aeration process, Tom conferred with Mr. John Wilder, the school's Bursar and they looked further into the process. Terrain Aeration were called and treatment of a number of pitches scheduled for when conditions were ideal for the company's Airforce machine to go to work. Two and a half cold but sunny days in February saw the machine at work on the pitches showing the most water retention, with the probe reaching a metre depth and injecting compressed air to break up the compaction panning. In the areas of the heaviest compaction the surface is seen to visibly undulate in a wave before settling back down, due to the sheer force of breaking the panning. Working at two metre intervals on a staggered grid ensures relief from waterlogging and increases the percentage of oxygen available to the roots. As the probe is withdrawn it injects dried, milled seaweed, which is organic, eco-friendly and sticks to the walls of the fractures and fissures. The seaweed swells and contracts to keep the fissures open while the longevity of the treatment is further ensured by using porous aggregate to backfill the probe holes. 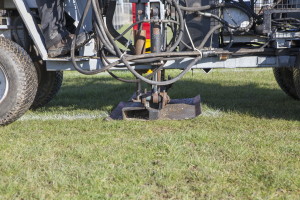 "Here in Moulsford we're in a rain shadow," says Tom, "which means we have only a small window for overseeding. We can put seed in but if the ground dries out and goes hard with compaction the roots can't get established." Terrain Aeration's treatment also benefits overseeding by creating a better environment for growth. The sunny days on the banks of the River Thames at Moulsford Prep School, which saw the Airforce deep aeration treatment at work, were followed by a night and day of heavy rain. Inspection of the treated area has already shown the beneficial effect of the deep aeration. The true test will be when the boys return after half-term and start playing again on the newly treated surface.