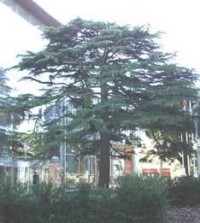 In August 2001, Suffolk based Terrain Aeration, was called to Swords, County Dublin, following completion in the town of a new County Hall for Fingal County Council. The trees, which were situated close to the building, had suffered the effects of compaction during the construction, and Kevin Halpenny, Senior Executive Parks Superintendent for Fingal Council's parks division feared for their health.

"A number of the trees were showing signs of severe die-back and decline with no extension growth during the season," he remembers. "Basically there had been no new shoots for two years."

Due to the proximity of the trees to the new building, Terrain Aeration employed their most manoeuvrable machine, Airforce Pedestrian, and made two circuits of each tree, working inside and outside the canopy injecting compressed air, one metre down at two metre spacings. Dried milled seaweed was inserted on the final air blast into the newly created underground fissures and fractures. Not only does this product provide nutrients, but also, as it swells on contact with moisture it keeps the air channels open.

Three years on Kevin Halpenny reports that the trees look very healthy and are growing year on year. "Trees of this maturity are irreplaceable," he says, "but before treatment we had concerns that at least some of them would not survive."

For further information on the deep, compressed air de-compaction services offered by Terrain Aeration contact the company on Tel: 01449 673783 or visit their website at: www.terrainaeration.co.uk