Our croquet club has a green of about 3000m2 with a 40mm thatch layer which we inherited when we leased the site (originally two bowling greens) about 3 years ago. Profiles taken from various parts of the green clearly show the thatch layer. We are advised that this leads to dry patch and fusarium, apart from a slower playing surface. As we aim for a surface similar to a fast bowling green, this thatch has to be reduced and we have started to use linear aeration/deep scarifying to attack this problem.

First some quick notes about our situation and available machinery

Methods of reducing the thatch layer

½? hollow tining. Shall continue to use occasionally to depth of 100mm ? right through the thatch layer and into the rootzone beneath.

Micro tining to 50mm. Useful in the spring in that it improves air penetration and we don?t need to top dress afterwards.

De-thatching products, e.g. Rigby Taylor Syta-Thatch. No ?on the ground? experience in local clubs that I have so far been able to contact.

Deep scarifying. As a complement to the hollow tining above. Compared to ½? hollow tining at 2? centres, 2mm blades at 25mm spacing affects a larger proportion of the green surface at one pass ? almost twice as much ? although it does not go as deep.

Why deep scarifying in the autumn?

We wanted to overseed as well, and without an irrigation system, we have found that overseeding in the spring does not work ? the new grass plants do not survive the late spring and early summer dry spells.

We were very nervous about using this treatment in the spring because, with no irrigation system, we were afraid that the grooves would open up during dry spells before new root growth had time to bind across the grooves.

Our recent experience with linear aeration

How thick, how close, how deep? Despite many enquiries I found it difficult to get any clear advice on the relationship between blade width, blade spacing and working depth. Mind you, the hire market seems to offer 2mm blades at 25mm centres ? you may have to hassle for anything else.

Avoiding overlap. If you overlap successive passes with these machines, you risk ploughing up the area overlapped. The R600 comes with a couple of supports for the collector box which we never use as the quantity of debris is so large. I tape a piece of wood across the supports and, sighting from the front of the machine, I mark the wood with the line of the outer blades ? which seem to be slightly off-set. I then use these marks as a guide against the last groove of the previous pass.

We experimented with increasing the depth of cut until we found that the turf between the grooves was becoming too unstable ? this was at a depth of about 25mm. The nature of the top layer of the green in terms of thatch, moisture content and root matrix obviously plays a role in how deep you can work. You have to be careful about the forward speed of the machine as well ? we worked at gearbox setting 4. At 5, the cut was too ragged.

Friday October 8th was dry. Switched dew off surface. Deep scarified the green (3000m2) in about 6 hours ? see Pic 1. We would probably do better next time ? you gain in confidence as you use machinery like this. Large amounts of debris were pulled up and a great deal of sand/rootzone as well. Do we really need to lift all that sand and pay to have it hauled away? See Pic 2. 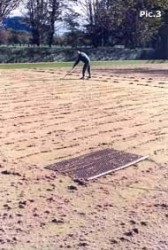 Gathering the fluffy thatch debris. We tried various processes ? rakes, snow shovels, blowers, but I feel that in the end rakes and snow shovels were perhaps the best. The problem with blowing the debris into heaps was the tendency to blow up the sand, especially fines, as well as the

Having removed the bulk of the debris, we dragged the green again to drag the loose sand into the turf. For a final clean we took out an old Ransomes 24 and adjusted the height of cut to avoid picking up sand and then mowed off the remaining debris. And very good it looked too. This had the additional benefit of smoothing down the surface prior to top dressing.

Over the next few days we overseeded and top dressed the green. To work from side to side of the green ? about 85 yards ? we had to load our top dresser with ¼ tonne per pass. Despite the grooves making the ground feel softer, there does not seem to have been significant rutting by the sand spreader?s tyres. We dragged in the top dressing along the line of the scarifying grooves. I then took out the old Wheelhorse tractor, hitched the drag mat to it and did two complete passes of the green at 45 degrees to the grooves.

I think in the spring we?ll micro tine the green again ? it all helps to remove thatch and improve air penetration. Being small cores, rumbling them with the drag mat is partially successful in dispersing the sand content before collection.

Next autumn, I?ll try to hire a deep scarifier with wider set blades ? say 40-50mm ? and cut down to the base of the 40mm thatch layer, working at 45 degrees to the direction of this autumn?s work. 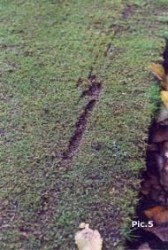 As we rumbled all the sand out of the debris from this work, I wonder whether we need to top dress? Next year I might be tempted to spread grass seed and drag the lot into the surface of the green. After all, apart from a heavier dressing, what is extra top dressing going to provide in addition to the sand/soil rumbled out of the debris? And it would save us a great deal of cash and work.

The concept of the top dressing penetrating the grooves in the soft ground after so much machinery and foot traffic (had effectively closed up the grooves) is a bit of an illusion, at least in the short term. The winter rains may wash it into the grooves ? time will tell. But the theory is that better air and water penetration will help the natural decay of the thatch layer and promote root growth.

One part of the green overhung by a tree has very weak root growth and the machine did pull up the turf in a few places ? see Pic 5. Anyone any ideas (short of felling the tree) for alleviating this problem.

As there is little or no money in croquet, we call on our members for a mighty effort to do all of this work. We do hire some modern machinery, and have a recently purchased an excellent 24? Allett Tournament mower. All the rest of what we use ranges from old to obsolete and survives on the application of much tender loving care. But it works well enough for the amount of use it gets.