A Scottish parkland course has overcome the seventies slump and a more recent attack of anthracnose to host its own "Masters" as part of the PGA Tartan Tour, for the third year in succession.

Built in 1978, and envisaged as the centre piece of a business, housing and leisure complex, Deer Park Golf and Country Club on the outskirts of Livingston in Scotland, suffered from the economic downturn, which affected countless similar projects all over the U.K. Having failed to attract the American and Asian business expected, the 18 hole course, has risen phoenix like, following its acquisition 18 years ago by The Muir Group. As well as investing in the course itself and bringing it up to championship standard, John Muir is achieving his vision of an American village. A business park and leisure complex including 10 pin bowling, a gym and an indoor swimming pool have been built in the same area, the most recent addition a development of 138 luxury apartments and penthouses. Future plans include a hotel.

"Now we've effectively fulfilled what we set out to do from the start," says Golf Manager Stuart Cruickshank. "We've got 1,800 members, a mixture of private and corporate who are either local businessmen or those who have moved their businesses here from outside. They have a choice of two membership categories, either joining the Country Club, which entitles them to use the pool, squash courts, 10 pin bowling and multi-gym facilities, or the Golf and Country Club which includes the golf course as well. The new apartments are selling to a similar market. Property in Scotland is still rising in value and many local businessmen see an apartment here as an investment, while we've buyers from all over the U.K. who are either downsizing or retired and looking to buy a retirement home." 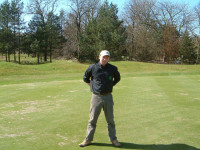 Cruickshank, who will have been at Deer Park 12 years this November, was familiar with certain Floratine products when he arrived, but it was when Greentech became distributors for the company in 2001, that he decided to embrace the complete Floratine approach. "I've known Stuart for over 17 years," says Tom Brannan, a director with Greentech. "There was no specific problem at Deer Park. We both thought that soil analysis would give us a better insight into what was happening in the root zone and once we had the results they would help us compile a more precise, targeted package."

Initial soil analysis showed calcium levels to be low, with higher than normal soil based iron levels, which were unavailable to the plant. Bulk calcium was applied along with Calphlex to make it soluble and , and the excess iron was flushed out with Maxiplex and the soil penetrant Pervade. Foliar feed, applied every fortnight included Astron to promote rooting, and Renaissance a micro nutrient package together with Knife a form of liquid iron. "During foliar feeding the plant will take in enough to sustain it for 10 to 16 days," explains Brannan. Working as a team Brannan and Stuart increased the aeration and top dressing programme and continued to take soil samples each winter. The condition of the course improved year on year and in September 2004, Deer Park hosted its first Masters tournament

Last winter, for no apparent reason anthracnose appeared. "Initially we were mystified," remembers Brannan. "The disease appeared out of the blue and the conditions which encourage it were not there." "2005 was a challenging year for the team here at Deer park," adds Stuart. "I was managing the whole complex and early on in the growing season I was stretched to the limit. I took my eye off the ball, and our nutritional programme was badly affected. It was this disruption to the feeding programme that brought on the anthracnose which wiped out almost 70% of the grass on the 18th green."

Having identified the problem the two men embarked on a strong foliar recovery programme which included PK Fight a product containing phosphite and potassium in a readily available form, Carbon Power to improve nutrient uptake, Trical, Astron, Renaissance and Per 4 max. to increase sward density. Conditions gradually improved and by spring the affected areas were treated to aeration, top dressing and over seeding.

"Floratine gives me flexibility and allowed me to put together the right package to rectify the situation," says Cruickshank. "It's a very technical approach and very manageable allowing me to react to changes in climate and conditions on the course."

Stuart also likes the fact that he can call on the technical staff at Floratine, at any time, free of charge. David Snowden, the company's European Technical Director recommended a special pre tournament programme for Deer Park in the run up to this year's Masters to increase grass strength, helping the plant cope with the closer tournament cutting length and increased traffic on the greens. "I was anxious to toughen up the plants, especially the new ones, keeping them full of goodies without promoting new leaf growth," he says. "I wanted to maintain continuity and colour and help the sward cope in extreme heat." The pre tournament package which included Turgur to increase internal strength and Perk-up a high quality foliar calcium was applied at four to five day intervals six weeks before the Deer Park Masters. The night the tournament finished Stuart and his staff made the first of four to six applications of Snowden's "recovery" package.

Appearing on the golf channel of Sky digital TV the greens at Deer Park did Stuart Cruickshank and John Muir justice. P.G.A. professional Craig Lee came in at five under par to take the winner's trophy for the second time, and perhaps next year he can make the hat trick. But who ever wins the prize, one thing's for certain, the Deer Park Masters is here to stay.