0 Deere's Board of Directors elect Samuel R Allen President,COO and Board Member 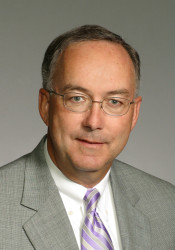 Deere & Company today announced that its board of directors has elected Samuel R Allen, 55, president, chief operating officer, and a member of the board of directors effective 1 June, and chief executive officer effective 1 August. Robert W Lane, 59, chairman and CEO, will serve as chairman of the board until Allen's expected succession as chairman.

"The Deere Board has completed an 18-month systematic process to choose Deere's ninth chief executive officer in its 172-year history," Lane said. "The board recognises, as I do, that Sam is a superb, smart, ethical executive, a wise and uncommonly capable leader, and someone with the proven experience and ability to effectively lead John Deere in growing a great, sustainable, global business."

A 34-year veteran of John Deere, Allen has been president of the Worldwide Construction & Forestry Division since 2005 and has been responsible for the global operations of the Deere Power Systems Group since 2003. Allen has served since 2001 as a senior officer of the company with early senior leadership responsibilities in human resources and industrial relations and the oversight of John Deere Credit's global operations.

In addition, Allen has been responsible for Deere's intelligent mobile equipment technologies and for Deere's advanced technology and innovation since 2007. Previously in his career, he worked in positions of increasing responsibility in the Consumer Products Division, Worldwide Construction & Forestry Division, Deere Power Systems Group, and the Worldwide Agricultural Division, including managing operations in Latin America, East Asia, and Australia.

"I am honoured to have been selected by the board of directors to follow in the footsteps of previous chief executives who have led Deere with great distinction," Allen said. "We have significant challenges but exciting global opportunities. I look forward to working with all of the uncommonly committed employees of John Deere to distinctively serve our global customers in ways that are highly rewarding to our shareholders."

Other senior executive moves include: