0 Defying the elements at Southwell Racecourse 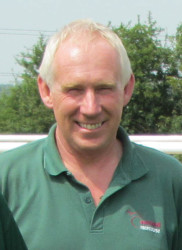 As yet another snowy weekend decimated sporting fixtures at the end of March, at Southwell Racecourse it was business as usual, providing fun for racing fans and income for bookies on an otherwise blank Saturday, and proving that an all-weather surface does have its benefits.

But it was a remarkable turnaround in fortunes for the Nottinghamshire dual purpose course, which had recently returned to action after three months spent recovering from a devastating flood in November 2012.

The neighbouring River Greet had burst its banks, swamping the home and back straights and invading the racecourse buildings, which were still being refurbished in July 2013.

A gargantuan effort to get the course raceable again by 10th February typifies the spirit at this small, friendly track, which races all year and hosts seventy-one racedays, twenty on the turf national hunt course and the rest on the all-weather.

Southwell is the only course in the UK using Fibresand for its all-weather track, and Estate Manager Simon Davies, who has been at the course since it was first installed, describes its management as a "continual learning curve". 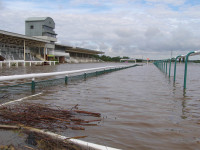 He explains: "The all-weather surface was initially installed at ground level, but we found that, after heavy rain, it acted as a 'basin', so it has since been lifted 200mm which helps water to drain away."

Initial management involved spraying the sand and fibre mix with oil to bind it, but this sank into the membrane and sealed it, leading to drainage issues. Rubber crumb was also added, but this too worked down through the surface.

Resurfacing had taken place twice before 2012's dramatic events - in 2003, and then again in 2007 when flooding led to a complete refurbishment.

"The standard procedure is to take the sand off, remove the membrane so that the stone can be graded, and top up with clean stone. The membrane is then replaced and topped with 100-200mm depth of sand - the 2007 refurbishment used 14,500 tonnes of sand." 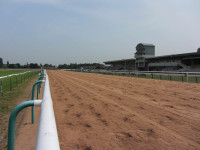 The routine maintenance regime has now been refined by the use of power harrows and rollers to level and firm the surface and regular watering.

"It is much less labour intensive than using the tow line system which waters the turf track," Simon comments.

There has been much debate about all-weather racing surface materials, but when the course was refurbished after the 2012 floods, Fibresand was once again the material of choice.

"Whilst Fibresand is slower and rides deeper than Polytrack, which all of the other courses use, some horses seem to prefer it and just run better at Southwell than anywhere else." 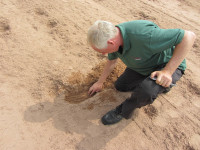 The new surface takes time to settle as there is a lot of fibre in it which snags in the maintenance machinery, reducing its efficiency, comments Simon. The sand also has to form a firm 'pad' which the horses run on as their hooves cut through the loose material on top.

Keeping even an all-weather surface in action requires a special effort during extreme weather.

"We have to harrow into the sand more deeply and work in white vacuum dried salt when it is frosty. We put on 10-14 tonnes using a fertiliser spreader to prevent the sand pad from freezing, and disc or harrow to 100mm while the temperature is above zero, before midday," says Simon.

Continual harrowing from 4.00pm until the following morning, with drivers working five hour shifts, then keeps the surface frost free.

"We have raced in temperatures of minus 12OC - we only had to abandon because the jockeys' goggles were freezing up, the track was fine!

It's hard work but, luckily, the cold spells don't usually last too long, plus other members of the team help out by doing a shift or two, even our accountant!"

Standard maintenance includes chain harrows and a Vaderstad Rexius Carrier which combines discs and packer to prepare the surface, working deeper to mix the fibres after rain.

"The regime depends on the weather - it is better not to stir the surface up too much in dry conditions, as it can get deep."

It requires a totally different set of kit to the turf track, with two 4m power harrows and the 6.5m Rexius Carrier, enabling up to 10m to be worked in one pass. These are pulled by a John Deere 7830 which also tows the slurry tanker. A John Deere 6630 handles one of the power harrows, and is used for rolling and moving fences. 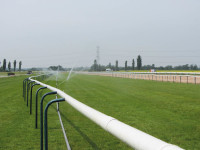 nd racing, there is just a brief lull in September for turf renovation.

"Due to the amount of divot filling that we have to do, it is impossible to scarify the whole track, so we tend to split the turf course and renovate half at a time, scarifying, vertidraining and overseeding ready for winter. Railing off the track to narrow it to 20m wide also helps with watering in the summer - we know we can provide consistently safe ground across the racing line."

The turf track is decompacted two or three times a year using a Wiedenmann XP shared between several courses in the ARC Group. 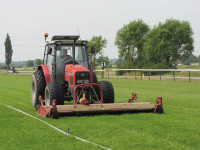 Mowing takes place twice a week with a 4m Votex front mower with rear blower, whilst a 36in cut Scag pedestrian mower tidies up between the rails.

Fertiliser is programmed to keep the turf at its best for year round use, with a liquid 31:0:0 feed applied in April.

"It was a very late spring this year, but the turf suddenly perked up, and we also used a liquid iron to give a colour boost," comments Simon. "Later in the year, 14:6:8+2%Mg goes on using a slow release granular formulation."

Summer racing requires the use of an irrigation system which pipes water from the River Greet all-round the course, using a tow line system.

Management of the turf course is simplified by having a single racing line, with a clever system for moving jumps. "We take the fences off and put the hurdles on according to the racecard," explains Simon. "This enables us to utilise the full width, moving the rail for each meeting to provide fresh ground. It also avoids the compacted ground that can develop at the take-off and landing of permanent fences." 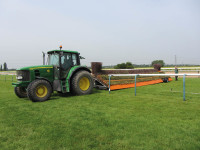 All of the fences - including the open ditch - are built onto hydraulic trailer systems, which enable them to be towed on and off the course with a tractor. Each trailer has a hydraulic ram to lower the fence into position, removable wheels and a retractable drawbar. Once in position, they are identical to any other national hunt fence, and Simon comments that they jump equally well.

Clerk of the course, Roderick Duncan, comments on how it also eases the mowing regime. "Where fences are permanently in place you are constantly turning, which is not only time consuming but also increases compaction around the fence. If frost is forecast, we simply remove the fences to avoid shading which can keep the frost in the ground. It's also very convenient - we can transport the fences into the workshop for refurbishment or repair and the complete course can be set up within forty-eight hours."

Back from the brink

The River Greet first burst its banks in November 2012, before further heavy rain caused another flood in December. Flooding lifts the fibres out of the sand on the all-weather track and, as the floodwater recedes, dumps them on the surface.

"This winter, we pumped water out over three days and were left with a layer of brown silt," Simon explains. "It sinks through the surface and is caught by the membrane, which at least keeps it away from the stone, but has to be replaced after grading the stone."

The stone was relatively clean, so was graded and tidied before the new membrane and 200mm of Fibresand was added.

Once the paperwork for the refurbishment was sorted, work began on 7th January, but the short days and bad weather slowed progress, so it was a month before the track was ready to race.

"In total, 9000 tonnes of sand were replaced - the floodwater takes it into the dykes and it can't be salvaged," says Simon.

After the flood, surface water was 75cm deep on the turf track and the priority was to get it off and stop the grass from dying. "As soon as the river had dropped we pumped the water off. We were left with a layer of silt, but there is little that you can do immediately on such wet ground. Our main challenge was removing the debris that had been dumped there by the water - from fibresand and hurdles, and even to the dyke bridges that had been washed away."

As the growing season has progressed, the number of weed seeds swept in by the flood has been evidenced by weed growth between the tracks, which will soon be tackled with a selective herbicide.

"We put liquid fertiliser on to give the turf a boost and vertidrained as soon as possible. Compaction is always a worry after flooding, but it was not too bad as we got the water off so quickly."

Extensive damage was also done to the buildings and, at the first meetings after the re-opening, it was 'upstairs only' for racegoers. On the plus side, as the 'glass half full' team point out, everything downstairs looks very fresh and new.

"It had been a huge effort to get everything back to normal, and the next step for us is to look at flood defences to help prevent anything like this happening again," comments Simon. 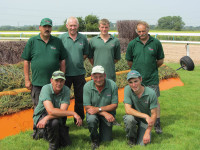 "Everyone does a bit of everything, although Kevin Voce and Richard Rose build the fences, also working alongside Neil Thornton and Nigel Metcalfe. We have two apprentices, David Lee and Simon Willey, and they are being encouraged to learn all the skills, including fence building.

We work some long hours and this is the hardest thing for young groundsmen to get used to, especially the night work. They got away with it last winter as they were too young!"

Simon Brown, John Scott and Brian Rice are greenkeepers for the golf course which is in the centre of and alongside the track and, along with maintenance technician Paul Barker, also take a turn with harrowing in the worst of the weather.