The main building is impressive, very high tech with a ¾ size indoor field turf synthetic pitch. The building is sunk into the ground so it can't be seen from the road. There's also a restaurant where the all the staff have their meals.

Every weekend is very busy. We have the Academy training each Saturday plus the u-17's or u-19's, then 3 or 4 games on Sunday. The Academy came here in July 2003, so we have had kids training here every night until 10.00pm, as well as the professionals during the day.

The site is very open, it's very windy. As part of the planning conditions we were required to plant over 3,500 sibling trees, but they're going to take time to mature. In total it took about 18 months to construct the training ground.

There are about 48 acres at Moor Farm. The area consists of 6 plateaus. The club spent quite a lot of money producing four good quality pitches and installing a hi tech irrigation system to the main 3 plateaus.

The other pitches were constructed by re-using the clay/soil on the site and installing a basic 3 metre drain. These pitches are out of action at the moment because they're saturated. £70,000 was spent on sand slitting a 25,000 sq metre clay/soil plateau, but seeding was late so I expect this plateau to now be in action in April. Three of the plateaus are just rootzone constructions, there's no fibre in any of the pitches, however the drainage is very good.
In addition to these pitches, we have 2 more full size pitches, 2 x ¾ size and 2 junior. We are planning to improve another 3 smaller plateaus in the spring.

We took over the maintenance from the contractor in the first week of June 2003. The area looked a bit sparse but there was, in fact, a lot of plant that was just underfed. It was a case of getting on there each day with the mowers and thickening it up. The main plateau is a hell of an area to cover mowing, particularly with Allett Buffalos. We now have 4 good pitches here and I treat them just like Pride Park. I think we're winning. I predicted it would take about a year to learn how each of the plateaus perform.

We were very excited about the challenge of the training ground, but it was very hard work to start off with until we got the machinery around August/September time. The contractor had constructed all these plateaus, but there was no way of getting up to them with machinery. We had to drive around the other 5 plateaus to get to the main one. Since then, we have put in a little tarmac road.

It has been a case of putting the shell there and improving as we go along. Being near the bottom of Division 1, money was extremely tight, however I do get good support. If I put in proposals and I can show that we can save money by buying rather than by bringing in outside contactors, the club does try to help us out.

Originally, when we moved here I was given a budget of £150,000 for new machinery. However, because of relegation the 30hp tractor and verti drain got kicked into touch. We did some wheeling and dealing, brought in some ex-demo machines, traded some in, and so on. In the end I only spent £35,000 on machinery. It's not ideal but we're coping and always looking to bring in new bits of kit. At the moment we have a 1.5m multi-core, 4 Buffalos, a Toro triple, a ride on rotary, a Toro workman and topdresser. It's not a lot really. We've also got a Sisis MT4 spiker, but most of the aeration work is done with the multi core. We're looking to buy a tractor with a bucket. All through the winter the lads have been hand loading into the top dresser, 25 tonne of sand each week! 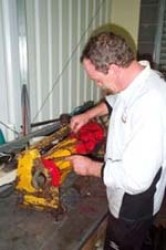 With the backing of the club we've set up our own little industry. We've just done all the machines for Trent Bridge, Derbyshire and some local cricket clubs. It's going from strength to strength.

The outside work helps to pay for Pete's wages, but it also saves us a good sum of money per year. Also, I don't have machines disappearing for days or weeks to an outside machine maintenance contractor. The machines are in superb condition. Pete sharpens and services them each month, so the grass gets the benefit. It's like having new machines all the time.

In my absence, or when I'm at Pride Park, Pete oversees the work here at the Moor Farm. I'm at the training ground at least 3 times a week. We have a good team. The 2 trainees are funded through DART (Dales Agricultural and Rural Training), a government scheme. They're doing NVQ's, but I am also putting my permanent staff through level 2. It's giving them a qualification to help them go on to bigger and better things if they want to.