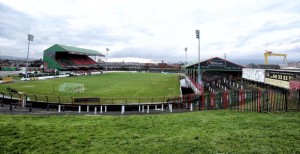 A new Oval will rise on the existing East Belfast site of the famous old pre-war ground, now earmarked for demolition after decades of decay.

The plan is for a completely redeveloped 8,000 capacity, 6,000-seater stadium at a cost of £9.2million, financed from the £10m set aside for a new Glentoran ground under the Government funding programme for sports grounds across the board.

Additional cash will be raised from the sale of land at the city end of the ground for social housing. And, in partnership with Belfast City Council and Belfast Metropolitan College, new 3G pitches, training and community facilities will be created at the King George V playing fields, adjacent to the Sydenham end of The Oval.

Plans seen by the Belfast Telegraph and unveiled to fans last night show four completely new stands enclosing a pitch turned 90 degrees from its present position with goalmouths backed by the Sydenham by-pass and Mersey Street.

Uncertainty has made Glentoran late to the party as other new and redeveloped stadia have sprung up across the sporting landscape, most notably Windsor Park and Ulster Rugby's Kingspan. Other Irish League clubs have also benefited.

But after years of indecision and false dawns, Glens supporters last night gave the thumbs up at their end of season AGM to a set of proposals from their board that actually look like progressing from drawing board to reality.

Those fans now have something tangible to look forward to after a disappointing season on the pitch and several years of financial constraints on team building as the club fought crippling £1m-plus debts, now significantly reduced. Delighted chairman Stephen Henderson said: "It has been a long time coming but at last we are in a position to move forward with a set of realistic plans.

"All the options were spelt out to the fans and they agreed with the board recommendation that development of The Oval was the most viable and suitable for us, not only financially but in terms of preserving our East Belfast heritage and tradition.

"There is a lot of history attached to The Oval and we will strive to preserve and add new chapters to that in a new fit for purpose, family friendly home where the old ground stood.

"Let's face it, The Oval is 30 or 40 years out of date in comparison to the stadia design today's fans have come to expect. We also feel a sense of historic timing with the club playing a part in marking the 75th anniversary of the Second World War Belfast Blitz that destroyed much of East Belfast, The Oval included. And now the rebuilding process begins again.

"Just as then, we have experienced challenging times at this club in recent years. The current board have met those head on and having brought our debt under control - for the third season running we have actually increased our trading profit - we can now move on to the next phase. Our supporters have given us a lot of latitude and now we aim to repay them on and off the field.

"It is no pipe dream. The plans we presented to the supporters are realistic and achievable and the funding and figures stack up. We are also in a healthy position, playing-wise, for the future with over 300 youngsters from all six counties progressing through our Academy."

Historical reasons apart, Glentoran opted for a new home from home over alternative proposals to build on the old Esso site at Sydenham or in Titanic Quarter, to ensure their share of the Government treasure trove for sport. Wording in the original DCAL document announcing the funding for football grounds appears to stipulate Glentoran's £10m share be used for 'redevelopment of The Oval'.

Rather than risk legal challenges from other clubs, a firm decision has now been taken to remain on The Oval site.

Chairman Henderson added: "We know there will be further hurdles to surmount along the way but a starting point has been reached and we move forward with a clear future focus for the first time in 30 years."

It is 28 years since a group of Glens directors travelled to Scotland to view St Johnstone's then newly built McDiarmid Park as a template for a new Oval.

Fans will now be asked to exercise patience for the two more years it will take for rebuilding work from when the bulldozers first move in. Glentoran will look for a ground share during that time, although Big Two matches with rivals Linfield will likely be played at the new Windsor, a smaller version of which the Glens now aspire to.

For the original article, visit www.belfasttelegraph.co.uk.