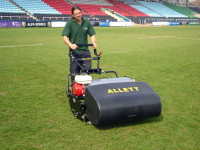 The machine was selected by head groundsman, Paul Sykes, following extensive evaluation of its features and performance on the pitch.

"An Allett was not my original preferred choice but I changed my mind after less than five minutes of using the C-34," commented Paul. "It simply felt right for the job. Well built, easy to handle and a very good cut, all of which are vital for a pitch used for rugby union from September until mid May and for rugby league from June to September. It's a tight schedule, but I have every confidence that the Allett can handle the pressure."

Head groundsman at Twickenham Stoop Stadium since September 2008, Paul is now employed by Nurture Landscapes who were awarded the maintenance contract for the high-profile west London rugby ground in January 2012.

"We needed to replace a number of machines this year, one being a wide-cut pedestrian mower ideally capable of carrying out complementary turf maintenance operations," explained Paul. "I am very pleased that Nurture persuaded me to have a demonstration of the Allett C-34. Following an impressive trial at the ground, an order was placed with Allett dealer, Winchester Garden Machinery, for a new machine complete with 34in cartridge heads for cylinder mowing and verticutting, both interchangeable in less than a minute."

Paul pointed out that the C-34's eight-bladed cutting cylinder is used up to three time a week during the main growing season to produce a high quality, consistent and good-looking finish for players, spectators and the TV cameras.


The precision cutting unit is swapped with Allett's verticutter cartridge head every two to three weeks between June and October to remove lateral growth and encourage tillering of the 100 per cent perennial ryegrasses sown in late May as part of between seasons renovations.

"Promoting growth of the better grasses is helping suppress Poa Annua, ensuring that the pitch retains its fine playing qualities and appearance right through the summer and into the winter," said Paul. "All in all, the C-34 is proving an excellent all-round machine, delivering a great cut and the versatility to do other jobs on the pitch, making it a very cost-effective investment."