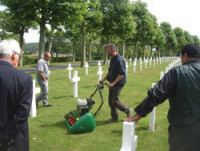 John Moore, Ransomes Jacobsen's Territory Manager for North Europe, in conjunction with Belgian distributor, A Verbeke & Sons NV, organised a demonstration day for the grounds maintenance teams from the American Battle Monuments Commission (ABMC) at a cemetery on the outskirts of Paris recently.

It proved the ideal opportunity to show the benefits of the Ransomes Jacobsen product range including the new Jacobsen AR3 and TR3 rotary and cylinder mowers.

Ransomes Jacobsen is a major partner of ABMC and supplies a range of equipment to help maintain US World War I and II cemeteries across Europe. As part of their agreement, the Ipswich-based company has also supplied a fleet of specially adapted Jacobsen T-Plex 185 mowers, which have been modified to enable them to mow between the rows of memorial crosses that mark the final resting places for casualties from the two Great Wars.

"This was very much a touch and feel day and was the perfect way for many of the grounds maintenance team to have a look and test some of our products", said John Moore. "It was also the opportunity to obtain much appreciated feedback from the end-users of our equipment. And it was a thoroughly enjoyable day."

The American Battle Monuments Commission administers, operates, and maintains 22 permanent American burial grounds in Europe and one in Tunisia, North Africa. Presently there are 124,913 US War Dead interred at these cemeteries: 30,921 from World War I and 93,242 from World War II.