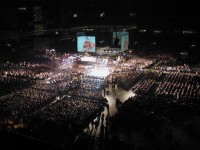 Parken Stadium is home to the Danish National team and FC Copenhagen. Originally constructed in 1954, Parken was redeveloped with the addition of three new stands, in 1992.

Don't look back in anger!

The focal point of any stadium is the pitch. As with many stadium designs, the pitch in Parken was not considered when drawing up the plans. The south west corner of the playing surface receives less than 45 minutes daylight, even on the sunniest day of the year.

In 1993, grow lights were positioned across the playing surface. Growth was encouraged, but was weak and leggy, and easily kicked out. Grassmaster fibres were injected in an attempt to stabilise the surface in 1994.

In March 1999, I took on the responsibility of the Parken pitch. Renovation works in the summer of 1999 were aimed at re-establishing the grassmaster fibres. A period of six weeks was allowed from seed. The fibres stabilised the pitch and the required surface was produced.

Parken's calendar already included many of the world's top artists, and the intention was to maximise the stadiums potential. The pitch is a business and the events would now provide a challenge to producing the required surface.

A Song for Europe

Denmark sang their way to Eurovision Song Contest glory with the Olsen brothers toe tapping classic "Fly on the wings of love". Winners in 2000, Denmark were duly awarded the hosting of the 2001 contest, and Parken was the venue, staging three shows with in excess of 80,000 in attendance. Terry Wogan could now be added to the stadium's growing celebrity list.

A condition of hosting the event is that it has to be staged indoors. Parken and Danish Radio collaborated and a retractable roof was constructed. A heating system was included in the design to enable events to be staged 365 days of the year. The introduction of speedway, in 2003, placed further demands on the playing surface. Renovations after the speedway event required total removal of the decayed plant, and recovery from seed. Establishment periods reduced as the events list increased. In 2004, the pitch was established in less than four weeks from seed. Simon and Garfunkel staged a concert on the pitch just twenty-one days after seeding!

Producing a fibre based pitch was achievable in the limited time frame. The required growing-in period, restricted the options for the events department. During the establishment, the pitch was closed and the events scheduling during the season was planned to increase.

Whilst the fibres provided us with an excellent playing surface, it did restrict the options when considering the diverse events. Individual areas damaged during events could not be returfed, as it would produce an inconsistent playing surface combined with the fibres. Turfing on top of the fibres was successfully maintained on occasions, but we were still restricted with our surface preparations when installing turf. Cultivating to aid rooting was the aim.

In January 2009, the fibres were removed from the pitch. The works needed to be completed by February to prepare for the league's second round and the spring season's opener, a Lego exhibition. 40,000 'Lego heads' attended the exhibition over four days.

Manchester City were to be our next guests for a Champions League qualifier. The Lego production cleared the stadium on the 15th and we received the pitch back on the 16th. The surface was cultivated to a depth of 10cm and base nutrition applied. Support in Sport commenced the turf installation and completed the pitch in fourteen hours.

FC Copenhagen trained on the pitch on the 17th, and that offered us a good indication of the playability of the surface prior to the official training sessions scheduled on the 18th. Irrigation, traction, ball response and roll could all be assessed. A 2-2 draw was played in the snow on the 20th.

Money's too tight to mention 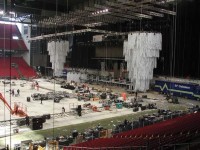 The strategy was to increase the use of the pitch. In 2009, the non-football events attracted over 300,000 customers into the stadium. Working in multi-use environments offers the potential to modify the turf manager's attitude towards the surface. We have changed our "keep off the grass" sign to "it will cost you". The pitch is a business. Standards are maintained with the correct management strategy and experience.

The production for the events has increased and access to the pitch for cranes and trucks is often requested. Providing the production with a user friendly environment encourages events and revenue. Renovation works are budgeted for in the planning of an event. Pitches installed must earn their fertiliser.

Planning events involves consideration of the fixture list and calculating the potential solutions. Any production is possible, we assess the practicalities and consequences.

Is there time available, and do the figures add up? If yes to both, then we schedule the event.

All events are planned in detail for the 'load in and load out', and a production plan is circulated. Meetings will take place involving the relevent departments for the show, e.g. operations, security, ground staff, maintenance, production, riggers, cleaning. The operations department will co-ordinate and draft a production plan.

Occasionally, the production for an event will contribute to the renovation of the pitch. If the stage requires cranes in situ on the pitch, or steel plated roads for access to the stage, an agreement can be reached.

When budgeting for pitch renovations, it can be cost effective to plan a new installation. Allowing production to go ahead with their event, without limitations and stressed grounds persons, can be beneficial to all.

2009 was another successful year in Parken. FCK were champions, Denmark qualified for the World Cup and the pitch performed consistently well.

Challenges faced by the grounds team were motivational and many. A relaxed spring season, with football and one exhibition being our only customer, the autumn calendar was set to entertain the locals. The schedule for the newly installed pitch would include concerts, a dinner party, and be finished off with a rave at the end of October, which required covering the pitch with steel plating.

The timeframe for the installation was limited, when we received the pitch back from Britney on July12th. 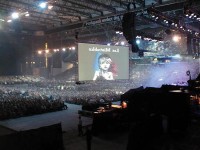 We installed a pitch on the 13-14th, and staged Champions League on the 15th July.

FCK then played at home on 1st August. Madonna sang like a virgin on the 11th August.

Madge's production wrote off the penalty area, so we stripped and relaid the area (1500m2) ready for training on the 14th, with a home game on the 15th. This was followed by a Champions League match on the 18th.

September was uneventful, with a local football 'super league', a World Cup qualifier and a few training sessions. 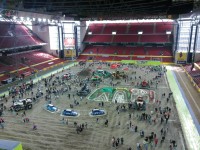 The rave would stress the pitch to the extent we would need time to recover the damage. The calendar limited our renovations and, therefore, the option to replace the turf was scheduled. This enabled Muse to put on a show on the Monday, leaving the pitch protection covers on, to reduce the costs and increase the revenue.

Work commenced removing the pitch on November 2nd, and it was installed ready for training on the 4th.

The autumn/winter pitch staged two concerts in December, and the X Factor in March 2010.

FCK claimed the title at Parken in May 2010. After the final whistle the gates were opened and the crowd enjoyed a free for all on the pitch. A stage and safety barrier had been pre-rigged outside and driven into position on a goalmouth for the celebration party.

Considering the schedule, it was cost effective to hand over the stadium to the operations department.

The installation for the new turf was set for June 23rd, to enable time to settle the pitch and allow the grass to strengthen ahead of the scheduled concerts.
In consultation with the operations department, the decision was made to install a further pitch on July 26th, after the load out from Pink.

The installation was completed on Monday July 27th, ready for pre-match training on the Friday.

Selecting the turf, preparing and planning the installation are crucial to the success of the playing surface. Rooting is the key to the success of the turf system. To achieve sufficient rooting, attention to the daily maintenance includes monitoring irrigation, aeration and nutrition. The lighting rigs enable us to energise the plant. Concentrate on the roots and the grass will thrive. We are trying to grow it down not up. Ideally, a period for growing-in the surface is advised, with a minimum of fourteen days.

The time taken to transport the turf is a consideration, and the option to cool it, in transit, is considered in the warmer months when working in Scandinavia.
Assessments of the turf are carried out at the turf farm including:
Turf strength
Grass species composition (Poa pratensis providing lateral strength, Lollium perenne good wear and recovery)
Pest and diseases
Rootzone - particle size distribution and compatibility
Turf maturity
Turf maintenance prior to harvesting (nutrition, dressing, cutting height)

Managing stadiums as a business enables development of the turf manager's role.

Economic responsibilities and understanding are a part of our daily work.

There are currently four full-time grounds persons managing the stadium and training ground pitches. The standard produced in recent years is a credit to the team effort of Daniel, Matt, Pete and Thomas, the "green team" as we are collectively known in Parken

The operations department are also key to the success of the pitch. With the resources and challenges we face, it is vital that all involved are working together. My role is somewhere between the green team and the operations.

Developing a positive approach, and appreciating the commercial responsibilities of our business, is important to progress the turf industry. When proposals are discussed concerning usage of a pitch, educating the planners will enable us to become part of the plan.

Stadiums will continue to stage non sporting events. Investing in stadiums and pitch systems is expensive and clubs/companies are required to recover their costs. There are solutions to all the challenges.

It's Only Rock and Roll but we like it!