0 Dennis and Sisis to consolidate in Kirk Langley 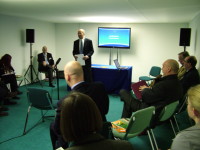 On 4th January 2011 Sisis became a division of Howardson Ltd, alongside Dennis. At that time the new owners promised an immediate review of all aspects of the business, including customer service and supply. This resulted in the aforementioned being strengthened and dovetailed in with the Dennis operation.

Following the in depth review of the existing facility and operations at Macclesfield it was concluded that it should be relocated to Kirk Langley at the end of June. Key members of the Sisis team will also move down to Kirk Langley to ensure customer continuity.

Major infrastructure changes are taking place within the organisation to expand systems ensuring an efficient operation and improving customer service and quality. During the move there will inevitably be some disruption but this will be kept to a minimum.

The site at Kirk Langley has been developed dramatically over the last few years with a new assembly facility being completed in 2010. A further building for expanded production and spares has just come on stream in time for the move.