The exciting event rewarded outstanding dealers for their success throughout the year. It also developed teamwork, together with some healthy competition. And after the last chequered flag was waved, Dennis presented the Awards to their top dealers of 2003.

Participants were split into teams of ten, each named after top Formula One racing teams like Williams, Ferrari and Maclaren. They then showed their driving skills in challenges from the world of motor sport. 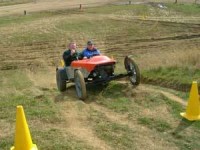 Handling the skid control car had many dealers in a spin - literally. And teams also had to negotiate a daunting obstacle course harnessing the awesome power of Caterham 7 motor sport vehicles, taking corners at gravity-defying angles.

After a full day, which was won by the 'Ferrari' team, the Dennis Dealer Awards were announced. The Dealer of the Year Award went to Campey Turf Care Systems, and the regional best Dealer Awards were given to Fraser Robb (Northern Area), Gibson's Gardening Machinery (Central Area), and Ben Burgess Garden Equipment (Southern Area).


"Our Dealer Hospitality Day was a tremendous success," says Ian Howard, Managing Director of Dennis, "and congratulations go to the 'Ferrari' team and our Award-winning dealers. Success is based on teamwork, and events like this strengthen this in a fun atmosphere. Everyone had a great day - but I don't think Michael Schumacher has much to worry about."