Matthew Hallam, head groundsman at Notts County FC, claims that the versatile Dennis G860 cylinder mower has been a saving grace after they were unable to carry out end of season renovations. 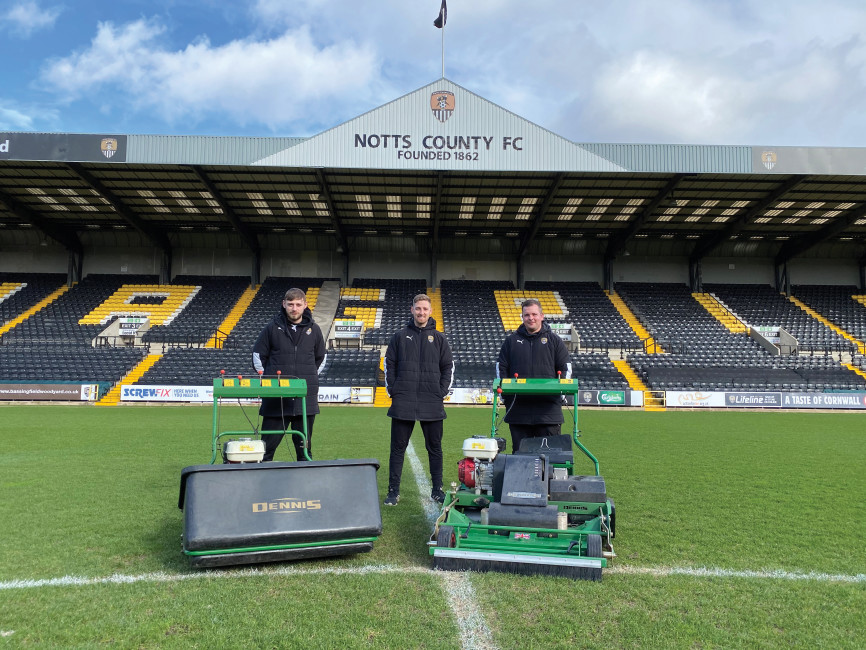 Matthew, who started life in the industry as a greenkeeper, has been the head groundsman at Notts County FC for just over 18 months. Previously, he spent ten years working at the nearby Nottinghamshire Golf and Country Club before taking the head groundsman position at Ilkeston Town FC. It was here that Matthew quickly impressed showing huge ability as a football groundsman and it wasn't long before he was offered the top job at Notts County FC.

It is safe to say that Matthew had somewhat of a baptism of fire upon starting his new role - the club were on the verge of relegation, and a change of ownership was looming. This, along with other unforeseen circumstances, resulted in no end of season renovations being carried out.

Despite being unable to strip the top off the surface and remove vegetation, Matthew has done a remarkable job in keeping the pitch in a superb condition all season. With the odds stacked against him, regular maintenance has been key and Matthew claims that the Dennis G860 has been integral to the cause.

"With us not being able to carry out the work, the Dennis G860 has really helped us," he says. "We have the Spring Tine Rake, the Verti-Cutter, the Brush, and the 8 Bladed Cylinder - so it is like a four-in-one maintenance machine. In the summer, we were verticutting as much as we could because we knew we had a thatch issue, and since then we have constantly brushed the pitch and raked the algae off the top of the surface. It has been a brilliant bit of kit for us and if we didn't have the G860 then these problems would only have intensified."

As Matthew says, the Dennis G860 features an interchangeable cassette system to assist with a wide range of tasks such as including scarifying, verticutting, brushing, spiking, and slitting. Lightweight at just 166kg; it is easy to manoeuvre and comfortable to operate. The handlebar console houses the controls for - throttle, parking brake, roller drive and cutting cylinder drive.

The mower also features a large diameter front roller with an adjustable scraper which has been designed for a precise height of cut control, giving an excellent finish on every occasion.

"The finish it provides is nothing short of excellent," he continues. "With the G860 we cut to 25mm in the summer and from October time we will raise it to 26mm-27mm. When winter arrives, we will raise it to 28mm and will stay at that cutting height until April - depending on the weather."

"It's very easy to use and it takes no time at all to take the cassettes in and out. We have tried other machines and we just feel that the Dennis G860 is the best on the market."

With a first full season nearly completed at Notts County FC, Matthew is looking forward to finally being able to carry out end of season renovations. While being relatively new to football groundsmanship, it is safe to say that Matthew has already found his calling but admits that every day offers a new experience.

"I have found that you are always learning in this industry," he says. "There is not one day where you do not learn something new and you are constantly getting new ideas and sharing experiences with other groundsmen."

"So, I will continue to learn and progress, and in the future choose to use Dennis Mowers due to their reliability, versatlility and the quality of cut."