0 Dennis G860 is at home with the country life Dennis's market leading machines are not only used by professional groundsmen and greenkeepers but are also the choice of discerning landowners for their personal use.

George Mansfield who lives in East Sussex is typical of the Dennis customer who expects the best from his machinery and finds all of his requirements fulfilled by the Derbyshire company. George runs a water effluent treatment company, Wendage Pollution Control, which includes a maintenance division that keeps pumping stations and sewage treatment plants tidy with hedging and strimming services, so he is well acquainted with professional quality groundscare machinery.

"I have always had a keen interest in gardening, landscaping and the environment," he explains, "and together with my partner Lyndsay, I enjoy looking after our 100 acre estate that includes a half acre lake, a flower meadow and a bluebell woodland."

With his previous mower - a ride on gang mower that he describes as 'old and noisy' - coming to the end of its life George went to Saltex 2009 to look for a replacement - a show he attends every year as a member of the I.O.G.

He explains: "I decided to have a good look at the Dennis stand with a view to making a purchase. I decided to buy Dennis for a number of reasons. First of all, I have always been aware of the company, from its days at Guildford and I knew the brand was synonymous with quality. Secondly, I have a very good engineer who has worked for me for a long time who used to work for Dennis and he swears by them!" 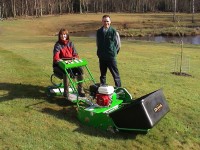 George comments that while he had a brief look at other makes of mower, he knew what he wanted, and it soon became apparent that the G860 would meet his requirements exactly. With a cut width of 86cm (34in), the G860 can maintain large lawns and ornamental areas efficiently.

"The G860 stood out because of its versatility and ease of use," says George " When I went onto the stand at Saltex '09, I was captivated by the cassette system, and because my partner is going to be using the mower a lot, I knew that I wanted something that was going to require the least amount of physical effort to use." He points out that the cassette system has really proved its worth:

"I can cut, scarify and remove moss all with one machine because of the quick change cassettes. It is important that we can achieve so many tasks with one mower, as I don't use chemicals on the grass because of the lake! I can easily swap between the six-blade cutting cassette, 2mm scarifier, and tungsten tipped verticutter."

Impressed with how user friendly the G860 is, George remarked: "The low level of vibration generated by the specially designed handlebars and the Honda Q9 was a very important aspect because we'll be using the mower for up to two hours at a time. Also, the G860 is noticeably quieter than other models we had previously looked at."

George also chose some useful accessories from Dennis's extensive range: "I bought a trailer seat because of the size of land we live on and because Lyndsay will be the primary user. I also went for a cassette stand that keeps the cassettes neat and tidy. Since purchasing the mower I have added a MowerSafe to keep my investment safe as well."

So, with the decision made, it was down to the G860 to prove itself on George's land, which it did in fine style: "When we had a demo from Matthew Clark at South East Groundcare Machinery, Lyndsay got on and she was away, no problems at all! The controls are simple and straight forward to operate." George is far from idle himself, as he explains:

"Currently, I am building an 'eco home' beside my existing cottage. I have always taken an interest in the environment and this is something I always wanted to do. All the water is recyclable and it has geo thermal pumps that heat the water, and provide central heating and under floor heating. When it is completed, it will have a large glass wall that will look out onto the lake and the grassed area."

For a gentleman with such exacting standards, another plus point is the fact that Dennis machines are British-made, he says: "This was definitely a factor. When I was younger, most of the things you bought were made in Britain and it meant they were quality - today it is rare. Everything about the G860 is well built. When you have been around as long as I have, you can see quality as soon as you look at it!"