0 Dennis G860 is top for a Scotsman in Spain

John Stewart, Head Groundsman at Deportivo Alaves FC in Spain, has said that his new Dennis G860 cylinder mower is 'right up there at the very top' when it comes to turf maintenance machinery. 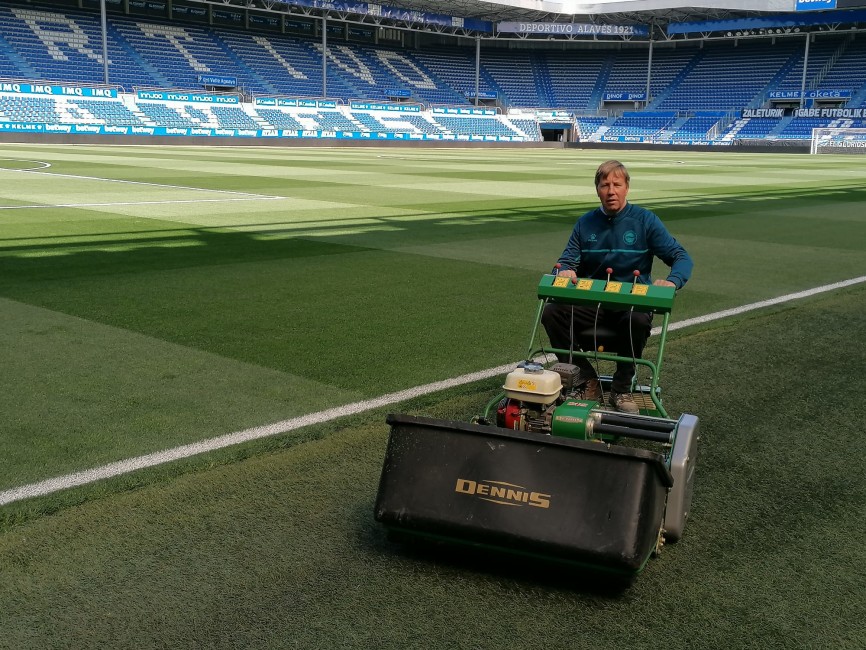 John Stewart, Head Groundsman at Deportivo Alaves FC in Spain, has said that his new Dennis G860 cylinder mower is 'right up there at the very top' when it comes to turf maintenance machinery

John's story is unique and while it may end in Spain; it began a lot further away in America. The proud Scotsman originally moved to North Carolina to teach the bagpipes but to help make ends meet he started working on the greens and fairways at the renowned Pinehurst Golf Course. It was here that he discovered his love for all things turf.

After heading back to his native homeland and gaining the necessary qualifications he switched golf for football while in Spain and took up the Head Groundsman's role at Real Sociedad FC. He later moved to Deportivo Alaves which is where he has since settled with his wife and children.

In that time, he has seen the club complete an amazing comeback. Having been left languishing in Spain's regional divisions, Deportivo Alaves are now back in Spanish football's top division, the prestigious La Liga. To cap an incredible decade at the club, John was named the best groundsman in Spanish football last year.

Under his remit, he concentrates on Deportivo Alaves' Mendizorrotza Stadium pitch and the training ground. As a self-confessed perfectionist, John is very particular in what machinery and products he uses to maintain the two sites.

"I've got a wide range of turf maintenance machinery, but I believe in using only the very best," he said. "I knew that Dennis mowers were up there with the very best and getting one of their machines was always at the back of my mind. Our budget allowed for one and we bought the Dennis G860 eight months ago. As soon as we got it out on the pitch, we saw that it was a fantastic machine."

John claims that the Dennis G860's interchangeable cassette system, which assists with a wide range of maintenance tasks such as scarifying, verticutting, brushing, spiking, and slitting, was one of the main reasons behind purchasing it.

"The cassette system is so simple to use and you can change them in less than two minutes," said John. "Even changing the cutting height is straightforward - it is just two bolts. This is how it should be because as a groundsman you are always pushed for time. You need equipment which will give you a helping hand."

John has the 8-bladed cutting cassette, verticutting cassette and brush: "The brush has been a gamechanger," he added. "I am constantly brushing the pitch to keep it clean - it does a brilliant job at removing debris and other bits that fly around the pitch during a game."

The Dennis G860 features a large diameter front roller with an adjustable scraper which has been designed for a precise height of cut control, giving an excellent finish on every occasion. Lightweight at just 166kg; it is also easy to manoeuvre and comfortable to operate.

"It is incredibly comfortable to operate and for me this is one of its best features," continued John. "We have a seat attached to the mower and it is just like sitting in your car. When you are using a machine for three or four hours at a time, then ensuring that you are comfortable is a top priority.

"It is just a great machine to have and in the growing season it is out on the pitch every single day."

When John is not tending to the Deportivo Alaves' pitches, he is fully focussed on his other passion - the GroundsmanSport magazine, which has been developed to support professionals in the sports turf sector.

For further information or a no-obligation demonstration, please contact Dennis 01332 824 777 or visit www.dennisuk.com