by Lucy Nicholls
in Industry News, Machinery & Mechanics, and Football
on 05 Sep 2015

Although there may be a 'special one' who grabs the majority of the headlines at Chelsea FC, there is another who is perhaps not quite so much in the spotlight. Both are renowned for being at the top of their game and one is obviously Jose Mourinho; but the other? The Dennis G860 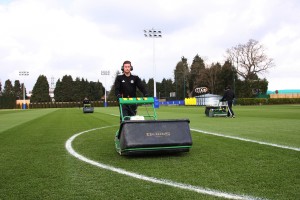 The Blues secured their fourth Premier League title last season and a club as prestigious as Chelsea FC has extremely high standards to adhere too; none more so than at the club's multi-million pound training complex.

The luxury complex consists of 32 pitches comprising of natural turf pitches and synthetic pitches which plays host to the Chelsea under 8's team right through to the first team. There is also a pitch to the exact dimensions and playing characteristics of the Stamford Bridge pitch. And it is for this reason that head groundsman Jason Griffin, has chosen the Dennis G860 to ensure the pitches are fit for champions.

"I've used Dennis machinery for about 15 years. We use the G860's here and at Stamford Bridge.

"We originally looked at other mowers, but the G860's stood out by a long way. A lot of top clubs are using these now and there is a reason for that," he said.

With a rich heritage of producing professional cylinder mowers which are renowned for their quality of cut, performance, reliability and versatility, Dennis continue to lead the way in producing world class turf maintenance equipment. In particular, the G860 is used in high class arenas around the world and was chosen as the official mower at the two most recent FIFA World Cup's in South Africa and Brazil.

The G860 features a large diameter front roller with an adjustable scraper which has been designed for a precise height of cut control, giving an excellent finish. It also has an interchangeable cassette system, and with a simple one minute changeover, users have the option of fitting eleven different types of heads including scarifiers, verticutters, brushes, spikers, and slitters - something which Jason is particularly impressed with.

"The G860's best feature is the ability to change cassettes for various tasks - that is what sold me. We've got every single cassette too," he said.

With 32 pitches to attend to at the training ground, Jason and his twelve members of staff certainly have their work cut out. It is imperative that the team have user friendly machinery to work with, something which the G860 excels in. With low vibration handlebars, manoeuvrability extremely easy, combined with the fact that only the forward drive handle needs to be held in by the operator, the G860 reduces fatigue and provides the user with ultimate comfort.

"We use the G860's on a daily basis and the staff love using them. They are extremely lightweight, not as heavy as other machines on the market and they are just so easy to use.

"Some of the machines on the market are good but I think Dennis are far better than anything else out there," he said.