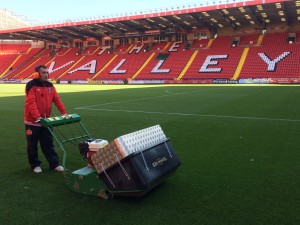 A recent change of ownership at Charlton Athletic FC means that Christmas has come early for head groundsman Nathan Chapman. After the new owners revealed their intentions of a significant investment at the stadium and also in the turf maintenance machinery, Nathan was asked to compile a machinery wish list. At the top of his list were two Dennis G860 mowers complete with a range of interchangeable cassettes.

Charlton Athletic endured a torrid time last season which found them battling relegation and playing their home games on a constantly waterlogged pitch. After being built in the 1950's the pitch was beginning to show its age. The drainage system had collapsed and with wet weather conditions over the winter period many games were postponed. With 20 years' experience in the industry Nathan was facing his toughest test yet.

"I love football and I love being in the industry. I pride myself on carrying out the right practices and one of those is presentation. Last season's pitch problems were an absolute nightmare for me personally. I couldn't even bring myself to watch our highlights on the Football League Show - it was embarrassing," he said. 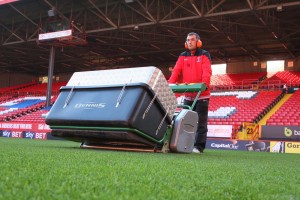 However the club received that much needed investment and a new pitch was constructed. In turn, Nathan was presented with the opportunity of getting his hands on some new turf maintenance machinery which would do the new pitch justice.

"I put a machinery wish list together coinciding with the new pitch because we needed the right equipment to maintain it. Last season we just didn't have the right machinery and the mower I was using was just too heavy - most of the time I didn't want it on the pitch.

"I wanted two Dennis G860s because I knew of their capabilities and how well they perform. They are very lightweight, you can brush, you can scarify, you can verti-cut; you can pretty much do everything with just one power source. The G860's also stripe the pitch perfectly for presentation. I was delighted when I received them," said Nathan.

Nathan is just one of many head groundsmen at professional football clubs who have turned to the Dennis G860. Internationally recognised, the G860 maintains the finest pitches in not just the Premier League and Football League, but has also been selected as the mower of choice for two consecutive World Cup's at Brazil and South Africa.

With an interchangeable cassette system including scarifiers, verticutters, brushes, spikers and slitters as well as 6 or 8 bladed cutter cassettes, a groundsman has never had so much versatility in one mower. Nathan has the complete set of cassettes and he now looks forward to his match day preparation, which is a far cry from last season.

"We are up there now with great machinery which will take this pitch further on. Last season's pitch was an old clapped out Fiat Punto but this year it is now a Formula One car and that is, in part, thanks to the Dennis G860's," said Nathan.

Nathan says that the Dennis G860 makes his life much easier, especially as he looks after the pitch by himself while he awaits a new assistant to be appointed. So with a new pitch, new machinery and an encouraging start to the season, Nathan believes that Charlton Athletic are now in a much better place - both on and off the pitch compared to twelve months ago.