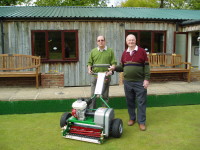 A Razor Ultra 560 bowling green mower from Dennis is proving a hit with the dedicated professional and amateur team who look after the green at Ewhurst Bowls Club in Surrey.

Chairman and Green Steward Richard Tabor explains that the top quality greens mower was chosen for its ease of operation, precise cut and superb finish.

"We previously had a mower of a different make which had been reliable but needed replacing. We looked around at a lot of different manufacturers and had demonstrations, and the only mower that matched the specification we were looking for, was the Dennis Razor Ultra 560." It has a 560mm (22in) working width and an 11-blade British made cylinder, which is relief ground for a quality cut and long intervals between grinds.

Another key feature of the mower that immediately appealed to the club was that the stub shafts for the power transport wheels are inset within the body of the mower, whereas on the clubs previous mower, the stub shafts would stick out of the side and keep catching on things. "That was definitely a plus point when making the choice," Richard says.

We knew that Dennis started off in Guildford (before moving to Derby) which isn't very far from us at all. That is another reason we preferred the Dennis, as it has a local history."

He contacted Cliftons Turf Machinery of Knaphill, near Guildford, for a demonstration of the mower. Robert Jack from Dennis did the demonstration and it was clear that the Razor Ultra 560 was the perfect solution for the club.

Richard comments: "We have a professional green keeper who mows the green for us once or twice a week, in addition to our regular mowing programme, and he has told us that the Razor is a real 'ease-of-use' machine. Both the volunteers and the professional greenkeeper say that the mower is easy to manoeuvre, well balanced and the Honda engine is easy to start. The ultra-short wheel base means that the machine performs extremely well on undulating areas."

He has also been impressed with the low engine noise, describing this as 'very much a plus point' and adding: "Everyone who uses the machine has said that it is also very smooth, reducing hand-arm vibration."

With its tungsten tipped groomer and Weile roller, the Razor Ultra offers superb performance on turf requiring a high standard of presentation and Richard comments that both the professional and amateur operators who are using the mower are pleased with the overall finish.

Dennis is renowned for its build quality and Richard reports that the Razor Ultra is very well made: "We definitely expect to get a long lifespan out of this mower!"

Richard says that the minimal after sales service needed has been promptly and efficiently delivered. "We haven't needed any after sales service really. We have had to contact Robert Jack once about a minor re-adjustment and he was able to sort it out very quickly. But to be honest, we haven't had to contact either Clifton's or Dennis even though they expressed that we could call on them any time."

Richard, who has been at the club for six years, was Plant Health Inspector at the Ministry of Agriculture for over 30 years, so he is certainly at home in a turfcare environment.

Ewhurst Bowls Club has 70 members, enjoying an outdoor green with six rinks. The club received lottery funding in 1997 which allowed the construction of a new bowls centre building that is also used in the winter months for indoor bowls. Throughout the summer, with high standards of turfcare and with a very British mower, Ewhust are producing superb greens for this most traditional of sports.