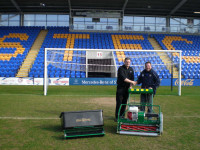 When Richard was looking for a new mower to maintain the pitch at Shrewsbury FC's new Pro Star Stadium, Dennis was his first choice as he had previously enjoyed a good working relationship with the Dennis Premier mower.

"I have been with Shrewsbury FC for about six years, and used the Premier at the old Gay Meadow ground. That was a traditional soil pitch, and the Premier produced an excellent finish on that ground as it rolls out so well."

However, the new stadium has a Fibresand pitch which, with small fibres in the sand to hold the surface together, requires a different approach, so Richard consulted Dennis to find the ideal mower.

I have been advised to Verti Drain it once a month as it gets easily compacted and I also water the pitch more than normal as the sand base drains more quickly than soil," he explains. "The Dennis G860 that I have chosen is a light weight machine, which along with its quiet running, low vibration handlebars and easy to operate controls makes it extremely comfortable to use."

Richard took advantage of the G860's interchangeable cassette system, adding a verti-cutter to the eight blade mowing reel, and

comments that the cassettes are very easy and quick to change. With an 86cm (34in) cut and well-proven 5.5hp Honda engine, the G860 has plenty of power and capacity to keep football pitches in perfect condition.

"Maintenance is very simple," he adds, "The grease nipples are easy to access and the mower has a good, solid build quality."

Cutting three or four times a week in summer and with a couple of passes before each game in the season, Richard points out that the mower is easy to use and produces a quality finish, despite the demanding nature of the surface. "Even though it is lighter than the Premier, I still get good striping."

Using the cassette system means that the G860 is more than just a mower: "The verti-cutter helps tackle thatch build up and avoids the spread of Poa Annua. You can really multi-task with the cassettes - I can also add a brush or a scarifier if I want to," he says.

Expert advice and support from Dennis and dealer Charlies Stores has been invaluable, comments Richard. "Toby Clarke from Dennis and Andy Darley from Charlies gave a demonstration of the verti-cutter and showed us around the mower - after seeing the G860 in operation, we were really inspired to get one. We were even allowed to borrow the mower for a three day trial at the Pro Star Stadium. I have been so impressed with the G860 that I have also recently purchased a second hand model as well!"