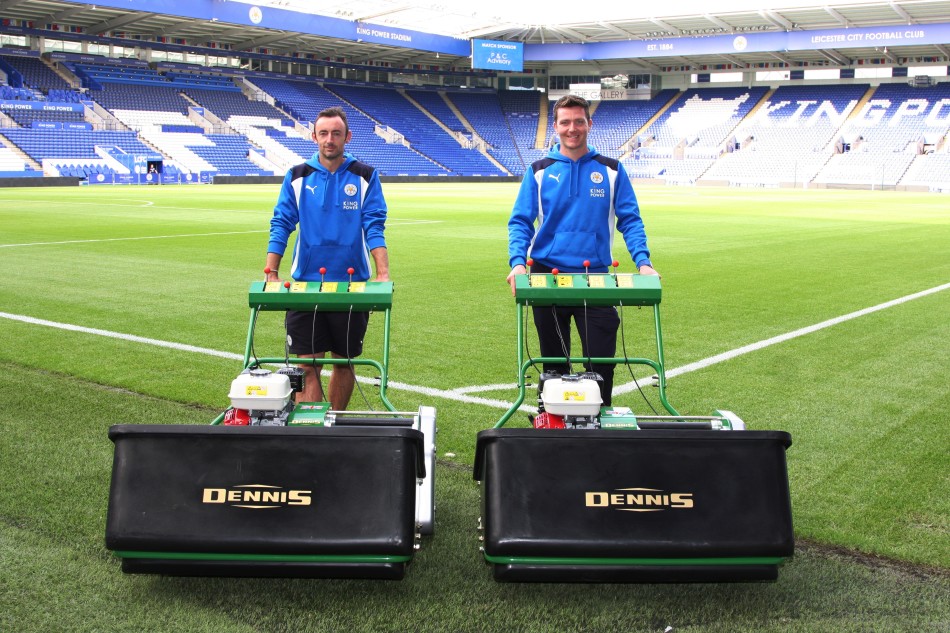 It is safe to say that the 2015/16 Premier League campaign was one to remember for Leicester City FC. With a squad valued at a fraction of their rivals, the team exceeded all expectations and lifted the most sought after trophy in English football. However, it was not just the players who were grabbing all the headlines - the pitch designs at the King Power Stadium were also consistently praised by footballing fans and media around the world.

The grounds team's artistry was exceptional and quite rightly, John and the team won many plaudits for his creativity and intricate, dazzling designs.

In revealing his mower of choice for preparing the pitch for Leicester City's heroes, John said: "To get the results, the Dennis G860 was our predominant mower and we used them throughout the season. They've been a good part of my career for a long time and I'm sure they will continue to be. They are a great company that manufacture great machines."

Last season John and his team had a fleet of seven G860 cylinder mowers - four at the club's training ground and three at the stadium. This season, with the grounds team expanding, the club added to their fleet by purchasing a further three G860's as well as a Dennis G34D cylinder mower. Designed and built following the same concept as the Dennis G860, the new dedicated G-Series mower incorporates a large-diameter eight-bladed cutting cylinder to cater for a wide range of uses.

Commenting on how the two machines are used harmoniously, John said: "We never really take the life out of the pitch but we do shift an awful lot of grass and sometimes, if for example, over the weekend it's been left for a day on a Sunday when we're not in, we will come in on the Monday and use the 6-blade cutting units in the G860. This is to really get through the thick of it and then as we move more towards the end of the week we'll use the G34D's to refine the cut closer to the game."

"Don't get me wrong, the quality of cut on the 6-blade cassettes for the G860's is still incredibly good, but when you want to take it to the next level with the intricate finer details of getting the precision of cut, then the dedicated 8-blades on the G34D will do that for us. Following a game we will use the G860s for the post-match clean-up. We'll pop the brush cassettes into the G860's to ensure that we collect all the debris."

"The two Dennis machines just offer us excellent versatility - the G34D is a dedicated unit for cutting so you're not taking units in and out and then the G860 allows us to complete so many other key maintenance tasks."

As John says, the G860 presents groundsmen with a multitude of options meaning that they can rely on just one machine for a number of maintenance tasks. Fitted with an interchangeable cassette system, and with a simple one minute changeover, users have the option of fitting eleven different types of heads including scarifiers, verticutters, brushes, spikers, and slitters.

A big fan of the interchangeable cassettes, John and his team recently added to their collection.

"We've had an influx of new cassettes which included three more 6-blade cutting units, four brush units and more verti-cutter units - just to give us a bit more armoury to choose from. It's been a bit of a busy one for Dennis, because we've had another influx of products but we like them and they're tried and tested. We like the quality of finish that they give us and that's why we've gone with them again."

"They're a long standing company that I've had a great relationship with for a number of years, and their machinery has always been exceptionally good. Alongside my team and the people that use them, Dennis have played a part in the club's success just as much as everyone else."