After being selected as the official mower at the two most recent FIFA World Cup's in South Africa and Brazil, Dennis Mowers will be the mower of choice for the 2018 tournament in Russia. 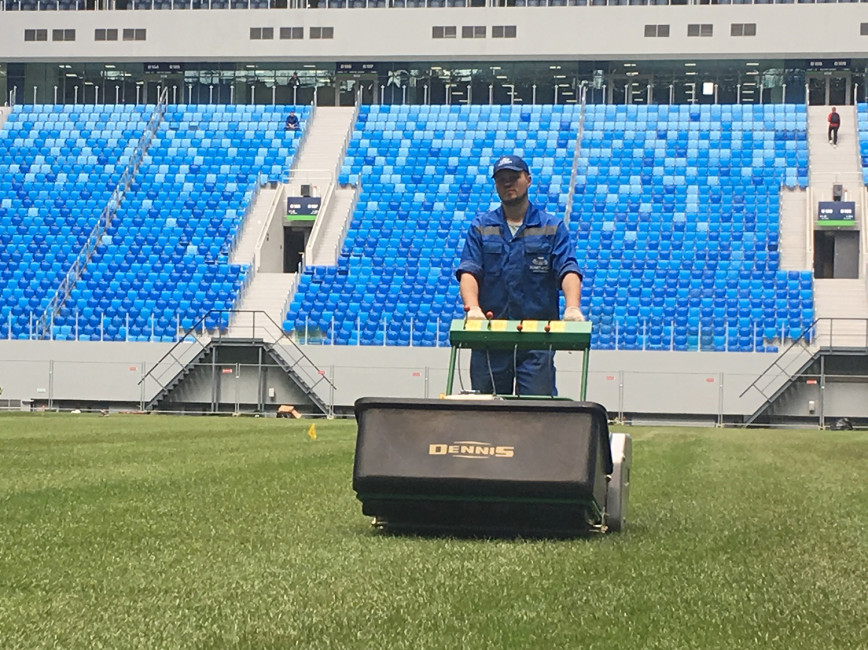 The Dennis G860 cylinder mower will have the task of preparing pitches for the world's greatest football players when the 2018 FIFA World Cup kicks-off in June 2018. Almost all of the stadiums used throughout the tournament will have their pitches maintained by the G860 and that includes the venues selected for the latter stages of the tournament.

The stadiums hosting the quarter finals, the semi-finals and the final itself have been confirmed as the Luzhniki Stadium, Saint Petersburg Stadium, Kazan Arena, Nizhny Novgorod Stadium, Samara Arena and the Fist Stadium Sochi - and all of these pitches will be prepared by a Dennis G860, while some will also utilise the Dennis Premier in conjunction with the G860 for matchday preparation.

Last year, these final games attracted worldwide audiences of up to 3.2 billion people, and it is for this reason, among others, that the G860 has been selected, according to Steven Rienks - managing director of Queens Grass, who are the official Dennis dealer in Russia.

"Quite simply, the main stadiums chose the G860 because of the quality and the presentation it offers. They all want that perfect stripe which the G860 provides because they know it will be watched by a worldwide audience," says Steven.

"For the past ten years Russian clubs have been using turf maintenance equipment from Dennis and 70% of the Russian Premier League teams have either a G860 or Dennis Premier mower. Many groundsmen over here know of their quality and their robustness - they know that they can use them for a diverse range of maintenance tasks without ever having any issues.

"In Russia, the weather is not ideal - for instance, in one area we only have around 60 days of sunlight over the course of a year, and the interchangeable cassette system really helps with maintenance procedures in a difficult climate."

As Steven says, the Dennis G860 features an interchangeable cassette system to assist with a wide range of tasks. With a simple one minute changeover, users have the option of fitting eleven different types of heads including scarifiers, verticutters, brushes, spikers, and slitters as well as six or eight bladed cutting cylinders.

Lightweight at just 166kg; it is easy to manoeuvre and comfortable to operate. The handlebar console houses the controls - throttle, park brake, switches and cutter clutch and only the forward drive handle needs to be held in by the operator which reduces operator fatigue. The mower also features a large diameter front roller with an adjustable scraper which has been designed for a precise height of cut control, giving an excellent finish on every occasion.

"In my opinion I'm always delighted to supply Dennis equipment to our clients because it guarantees the quality our clients expect from us," said Steven.

For further information or a no obligation demonstration, please contact Dennis Mowers on 01332 824 777 or visit www.dennisuk.com