After a long-term search for the ultimate rotary mower, Andy Richards - grounds manager at Shrewsbury School, believes that he has finally found what he has been looking for in the Dennis PRO 34R. 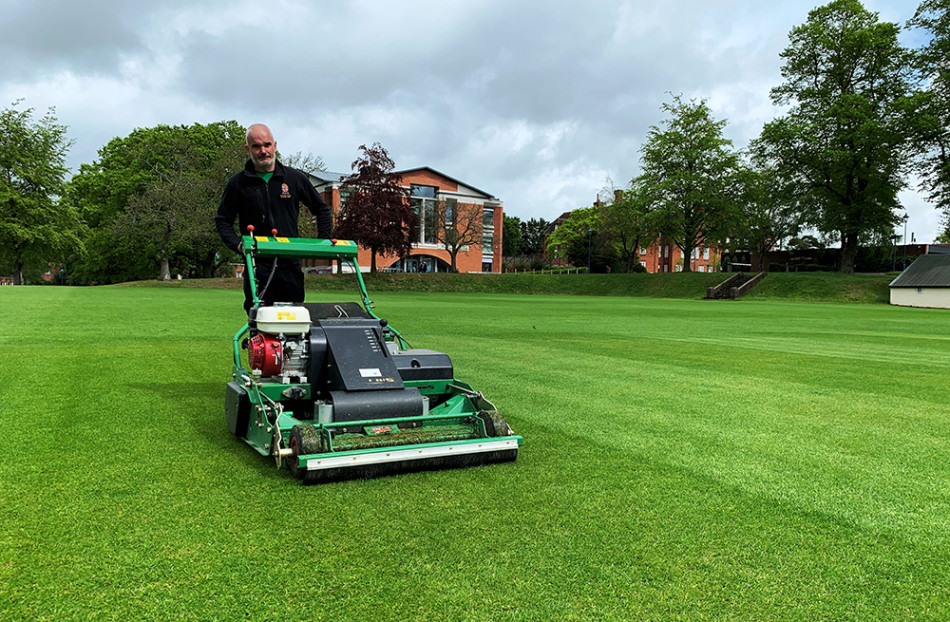 Shrewsbury School has a world-class reputation for all-round excellence. As well as boasting fantastic academic results the school is also renowned for highly competitive sports teams. The pupils compete internationally in cricket and its football teams are considered to be some of the best in the UK.

In matching the reputation of its teams, the sports pitches are also highly regarded and there's a reason that the first team pitches at Shrewsbury School are on par with most Premier League football pitches or County Cricket pitches. That reason is grounds manager Andy Richards, who has been in his current position since 2010. Ever the perfectionist, Andy and his team arguably encounter some of the highest usage in sports turf, and even still he insists on leaving no stone unturned.

Andy demands the best in all aspects of his role and even more so when it comes to turf maintenance equipment. After struggling to find a rotary mower which matched his expectations, Andy claims that the solution arrived in the newly launched Dennis PRO 34R.

"Over recent years we have struggled to find a rotary mower that actually ticked every box - they were either too fast or not fast enough; some were too heavy and some felt too light; and there were some that would not pick up the debris clean enough or produce a good enough cut.

"I saw the new rotary mower at a recent exhibition and knew it would be good because it is a Dennis mower and I already know the quality of cut from their cylinder mowers. It actually seemed to me that a rotary mower was something which was missing from their portfolio so when it did finally come to market I put my name down as soon as possible to get one. It is safe to say that it definitely hasn't let me down."

The Dennis PRO 34R is a 34" (860mm) rotary mower which has been designed to help groundsmen achieve an aesthetically pleasing appearance and desired playing surface. It is ideal for sports pitches and lawns producing the enviable 'Dennis Stripes' while a powerful vacuum flow collects debris quickly and efficiently.

The angle of the cutting deck and twin blades can be easily adjusted using a single 'click adjuster' ensuring the mower is suitable for changing conditions and meeting groundsmen's requirements.

"We bought two of them and I would say that they are easily our most used machines," said Andy.

"We originally just bought them to hoover up the debris but we quickly found that the cut is comparable to a cylinder mower so we started mowing with them too. Our first team football pitch is surrounded by 30 trees so in autumn we used to come out in the morning of a match day and leaves would be all over it. We actually used to use a cut and collect ride-on mower and then follow up with a Dennis cylinder mower but now we just use the Pro 34 R. It does a brilliant job, saves us time, keeps the weight off the pitch and avoids wheel marks from the heavier ride-on machines.

"I had a feeling it would also work well on our cricket pitches and it has. The amount of debris that is produced during the cricket season is huge. We blow it off with blowers from the surrounding wickets so they can get covered and then the morning after we just hoover it all up with the PRO 34R.

"Maintenance wise, it has been completely trouble-free. It's my favourite machine at the moment and I think it will take some beating," said Andy.