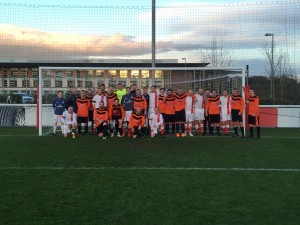 In a bid to raise money for the charity, a friendly football match was arranged at St George's Park - the English Football Association's national football centre at Burton upon Trent.

Prior to the game, Dennis, SISIS and Fusion Media staff were invited for an exclusive behind the scenes tour of the world class facilities where they received a fascinating behind the scenes look from St George's Park head groundsman Alan Ferguson.

Alan also played his part in the game, which took place on one of the training pitches used by England's first team, by managing the St George's Park staff team. The away side from Dennis, SISIS and Fusion Media, captained by Dennis & SISIS general manager Toby Clarke, took to the field in a kit sponsored by their marketing agency.

All proceeds raised from the game were then donated to the charity.