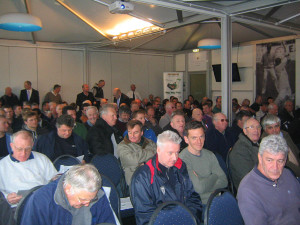 The opportunity to attend one of the Dennis & Sisis Equipment groundsmens seminars is one that should not be missed, and so it proved for well over 100 delegates who attended the company's latest cricket groundsmens seminar at The County Cricket Ground in Hove, East Sussex.

The host was the Sussex County Cricket Club's Head Groundsman, Andy Mackay who, at dinner the previous evening, confessed to being somewhat nervous about the following day. It should also be noted that fish and chips should not be served 'nouveau cuisine' to hungry turfcare professionals!

After an early start the following morning (breakfast was slightly less NC), delegates began arriving from 9.00am for a 9.45 start.

The programme for the day was kicked off by the company's Area Sales Manager, Robert Jack, who welcomed delegates and thanked the event's sponsors, Boughton Loam, Limagrain, Cricket World and Sherriff Amenity, for their additional support.

The first speaker was Andy Mackay who gave a detailed account of his role as head groundsman, including an update on his method of pitch relaying and how that is progressing. He also explained fraise mowing and how the Gwazae deep aeration machine has helped improve drainage on the outfield.

Next up was Mark Robinson, the club's Professional Cricket Manager who, in a very interactive presentation, conducted a 'them and us' scenario with the floor. This created a good number of amusing comments, with the upshot being that cooperation and communication between the players, coaching staff and grounds team was vital if the club were to be successful; a situation that, Andy agreed, was well in place at their club. 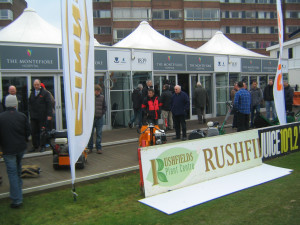 The Sussex connection continued when former player and CEO, Tony Pigott (aka Lester, even though his surname is pronounced pie-got) addressed the audience on his role as an ECB Pitch Liaison Officer, explaining how the system operated and why a points deduction was required in certain circumstances. He confessed to being somewhat naive when he took up the role eight year's ago and, when he asked another county head groundsmen what people thought of him back then, the one word reply that came back began with A and finished with hole!! It was agreed that he now has a better understanding of his role!

The morning session was completed by Tim Shutt, Head of Cricket Development at Sussex CCC, who explained why pitch scoring in the premier and county leagues is important for the development of future county and international players, and how raising the standard of pitches can only be a good thing. He confessed that, whilst the system is not yet perfect, it was certainly a step in the right direction.

After a proper groundsman's lunch of bangers and mash and 'pudding', delegates were given the opportunity to view the Dennis and Sisis machines, talk to the sponsors or head out to the square to ask Andy any questions. Refreshingly, there was no hard sell.

Back inside, it was time for the next speaker, Barry Glynn of East Molesey Cricket Club in Surrey, to talk about the frustrations of a club cricket groundsman. He delivered a humourous presentation, highlighting many issues that were recognised by the floor. 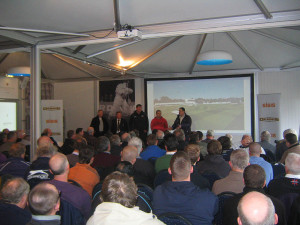 The humour was continued when Stuart Kerrison, Head Groundsman at Essex CC, took the stage. As well as regaling the floor with anecdotes about his time at Essex, he praised all county groundsmen for their efforts through the dreadful summer of 2012, before discussing some of the new techniques becoming available; many of them originated by the 'mad professor" Keith Exton at the SWALEC. Because of the continuing cold weather, he, along with some other county groundsmen, had taken the decision to place a 90m x 30m marquee over the outfield net strips so that the players could train in early March.

Finally, Andy invited the assembled County head groundsmen up on the stage for a Q&A session.

Congratulations should go to Andy for assembling such excellent speakers covering varied and interesting topics, and to Dennis Sisis for organising the event.