0 Dennis supply mowers to the World Cup in South Africa 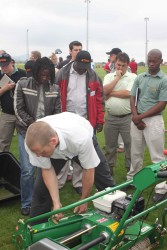 Midlands based mower manufacturer Dennis have won a prestigious order to supply a total of 27 machines to the stadia and training facilities at the 2010 FIFA World Cup. These will be supplied through Dennis' partner Smith Turf, one of South Africa's largest dealers based in Johannesburg with a network of support centres around the country.

The competitions 64 matches will be played in 10 state of the art stadia in Pretoria, Port Elizabeth, Capetown, Bloemfontein, Rustenburg, Nelspruit, Polkwane, Durban and Johannesburg with the final being played at the impressive 95,000 seat Soccer Stadium in Soweto, Johannesburg.

Four local specialist sportsturf contractors have been involved in this major projuct constructing, upgrading and maintaining the facilities to meet the exacting standards of FIFA.

The contractors have specified the Dennis G860's with 8 blade cutters, tungsten tipped verticutters and brush cassettes chosen for the cut quality, performance and versatility. Playing surfaces must be consistent at match stadia and training facilities for the benefit of the participating teams whilst pitch presentation is also required to be aesthetically pleasing for a worldwide audience on television and the internet.

A team of agronomists from STRI have been appointed as the pitch consultants to FIFA and are working with the local South African teams to ensure the pitches across all 10 stadia and 32 training camps meet the exacting FIFA standards, sharing their years of experience of working on pitches and stadia across UK, Europe and Middle East.

This 'sharing of knowledge' continued when an educational 'Grow-In Day' was arranged at the end of April for all the contractors and groundstaff from all over the country. This was held at the England training camp at the impressive Royal Bafokeng Sports Facility in Rustenburg 120km from Johannesburg. Toby Clarke and Ian Howard of Dennis were invited to the event along with Stephen Mangold of Smith Turf. There were over 80 people at the event where there was a detailed briefing on all aspects of the pre match preparations including watering, aeration, height of cut and frequency to name a few.

Considerable time was spent explaining about the aesthetics of the pitch with mowing stripes of particular importance. Toby Clarke demonstrated the usage of the Dennis with the machine flown in the previous week, "It was great to be on the England training pitch and meet the team who will deliver the playing surfaces in the coming event" commented Toby.

Back at the Derby factory the whole of TEAM DENNIS has been involved in the building and preparation of the order. The new factory facility has come on stream just in time for this.

Your video will load shortly. If it does not, you need to check that you have - Javascript enabled and Adobe Flash 9 (or later) installed.