0 Dennis triumph in the Premiership

DENNIS TRIUMPH IN THE PREMIERSHIP 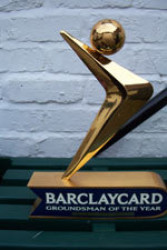 The annual quest to find the top pitch is a painstaking one. After each game, referees file a report on the state of the playing surface. Marks are collated throughout the season and then the highest achievers are visited by officials from the STRI (Sports Turf Research Institute). They assess the overall maintenance regime of each short listed club, and present their findings for final judgement by the FA's Playing Surface Committee, one of whose members is from the Institute of Groundsmanship. This year, Roy Rigby and his team emerged as worthy winners.

Manchester City's Dennis G760 mower is a 30in width pedestrian cylinder mower, designed to give the perfect fine finish to the match-day turf. One important feature is the machine's low weight, which ensures that compaction is minimised and that tight turns can be negotiated without damage to the grass.

Dennis machines are also used by the football clubs voted to have had the best pitches throughout the Nationwide League in 2002-03, including Wolverhampton Wanderers in the First Division, Cheltenham in Division Two, and Hartlepool United from Division Three. Likewise, last year's IOG Winner of Groundsman of the Year, Steve Welch at Notts Forest, is also a keen Dennis fan.

Dennis mowers are used by all sorts of sports clubs throughout the world at all levels. The