by Matthew Campelli
in Synthetics and Football
on 09 Feb 2016

Derby County is set to install a part artificial pitch in its home ground - the same surface that will be used for the 2018 World Cup final. 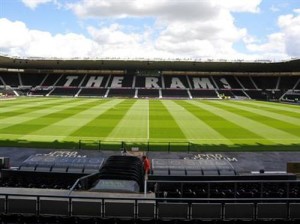 Paul Clement, the former Derby County head coach, recommended the pitch to the club's board after testing the surface at St George's Park - England's National Football Centre in Burton-on-Trent.

"This kind of pitch allows us to play the football style we want and has a very even roll and bounce. It has the 'give' we are looking for and meets all of our requirements," said Clement, who left his post yesterday (8 February).

Derby will wait to install the pitch until the end of the 2015/16 season, although work on the training facilities are scheduled to start in the spring.

The surface will be used at Luzhniki Stadium in Moscow for the 2018 World Cup final - the first time the showpiece game will be played on anything but 100 per cent natural turf.

John Vicars, chief operating officer for Derby County FC said: "We want the best quality surfaces right the way across the club and in SISGRASS we have chosen what we believe to be the highest level of innovative reinforced natural turf.

"The club trialled the SISGRASS pitches recently at St George's Park and the quality was particularly impressive. The coaching staff and players felt comfortable on it and that is extremely important for us."