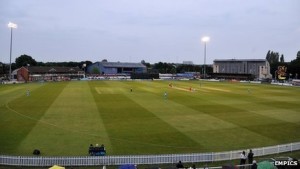 Derbyshire County Cricket Club is bidding for funding for a £3.65m redevelopment of its ground with a view to hosting a 2019 World Cup game.

The club has secured £1.7m from the England and Wales Cricket Board to redevelop the County Ground.

It is now looking for £1.9m in loan and grant funding from Europe, the government and local business groups.

The redevelopment would include a new media centre and increase the ground's capacity from nearly 5,000 to 7,000.

A club spokesman said landing a 2019 World Cup match was not crucial but the main aim of the proposal was to be eligible to be considered for international matches and improve facilities for players and spectators.

The new ground could also host concerts and community events.

The club had previously suggested it may have to move from its current home but, after talks with the city council, said redevelopment was the only possibility within the city of Derby.

Chief executive Simon Storey said: "Now we have clarity on the council's position, it's clear that the only option available if we are stay in the city is to secure external funds to deliver the planned redevelopment of the County Ground.

"We will, therefore, pursue the funding opportunities with the various bodies in the coming weeks and revisit our business plan projections and development plans accordingly."

He added that the club had not completely ruled out a move to an alternative location elsewhere in the county.

"We feel it's prudent for the club to continue with its evaluation of alternative options elsewhere in the county, as well as continuing our recently announced off-field operations review as we seek to reduce our on-going costs and balance our existing budgets in the short term," he said.

Derbyshire were relegated from Division One of the LV County Championship in September.