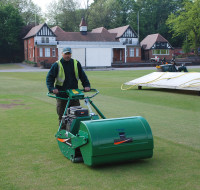 The cricket square and outfield at Chesterfield's Queen's Park will be in pristine condition this season with the arrival of a new Ransomes Mastiff pedestrian mower, supplied by local RANSOMES JACOBSEN dealer, Platts Harris Ltd.

Head Groundsman Tim Nicholls has replaced his 20-year old Mastiff with the very latest version from the Ipswich-based manufacturer.

"Our old machine served us extremely well; it was a great stalwart and I'm sad to see it go," he said. "However, the new machine is obviously a more modern mower, but it's still as versatile as before. Early in the season I can use it as a light roller to provide some firmness to the soil; I just put some weights in the grass catcher. If the outfield needs tending, then I attached the trailing seat.

"The quality of cut from the Mastiff is superb and I'll cut to 12mm for match day preparation, but on the two new pitches which we're establishing this year, I'll obviously cut higher until we actually use them.

"We've also taken delivery of a new Iseki TG5470 compact tractor with a Lewis loader, again from Platts Harris. It's used as a general workhorse here at Queen's Park and also at our annexe for conditioning the athletics track."

Built to celebrate Queen Victoria's Golden Jubilee, the park opened in 1893. It was recently refurbished, with help from a lottery fund grant, and has been returned its full Victorian glory.

Derbyshire's first match at Queens Park was in 1898, shortly after the completion of the new pavilion. In 1904, W G Grace played there against Derbyshire and the 1930's Don Bradman twice played for the Australians Park and true to form averaged 60.5 in his three innings against Derbyshire.