0 Derbyshire FA launch hunt for groundsman of the year

The 2015/16 FA Groundsman of the Year Awards has now opened and Derbyshire FA, in partnership with The FA, is on the hunt for the next National winner 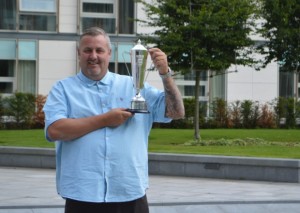 Last year Lee Watson from Clay Cross Town FC was crowned National winner and the county are hoping for a repeat success.

The majority of football in this country is played outside the Football League, quality pitches are therefore essential for the development of football at every level.

Grassroots groundsmen, the vast majority of whom are volunteers, play a huge role in ensuring pitches are in their best possible condition, week in, week out.

These awards provide a fantastic opportunity to recognise and reward Club Groundsmen at Step 7 and below in Derbyshire and once again Derbyshire County FA has committed to providing a financial reward for the club;s that have a winning Groundsman in the top 3 for the County.

DCFA has also gained the support of Fleet Line Markers to ensure there are relevant prizes for the top 3 Derbyshire winners.

In the 2014/15 Groundsman Awards the top three groundsmen in Derbyshire were from Clay Cross Town FC, Tideswell United FC and Mickleover RBL FC, whilst one additional club was deemed highly recommended.

To enter a groundsman for these prestigious awards email keely.brown@derbyshirefa.com.

The closing date for applications is Monday 22nd February 2016. Derbyshire County FA will then select its top three applications to submit to The Football Association.

For the full article, visit www.chad.co.uk.