0 Derek leaves a fine trail to follow at Sussex CCC

Derek leaves a fine trail to follow at Sussex CCC 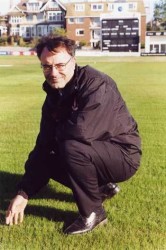 Derek's path into cricket groundsmanship started in Aberdeen, when he decided to take a year out of his industry (oil) and try something else. He had always being associated with cricket having played the game for Aberdeenshire CC.

In 1995 the club's groundsman became ill and had to give up the job, setting up the opportunity for Derek to take over. He soon started to relish his new role and went on many IOG courses making the point of learning about the trade at every opportunity.

After five years he applied for, and was successful in being appointed, Head Groundsman at Sussex CCC, taking over from Peter Eaton. He was eager to apply and test his skills at a higher level and had to adapt very quickly to the demands of county cricket, with the long hours and the pressure to provide consistent playing surfaces both at the crease and in the nets.

Derek was not fazed by the challenge he faced. He believes that the principles of groundsmanship are the same regardless of the level; it is how you apply them to the situation you are in and the time you have to complete the work that matter.

When Derek started he was only responsible for the County Ground, managing an 18-pitch square and net facilities. Over the years he became responsible for two other practice grounds, which included the new second XI academy, and five staff.

The most valuable asset, according to Derek, is time. There seldom seemed to be enough hours in the day. New technologies and products have certainly helped the industry. Linear aerators and modified dwarf rye grasses have improved end of season renovations enormously.

Facilities can now be renovated within days instead of weeks.

Derek believes the art of good groundsmanship is the ability to understand what is going on and recognise the needs of the sward. Think about it in the light of one's self - how would you react or feel if you were only fed every six weeks? How would your head feel if it was constantly rolled and bashed?

A little and often approach is Derek's philosophy, and understanding that there are other ways of achieving results. You just need to think about what applications suit your requirements.

Keeping records of what's been done and the response to certain operations is a key method of gaining a better understanding of your facility. No two sites are ever the same. Derek does, however, have some concerns over the future of the industry and, in particular, cricket standards at the county level.

Having self pride is crucial to gaining the respect of others. The way we present and conduct ourselves is critical if we want to raise the profile of our industry. Derek says that there are still to many groundsmen who do not care how they look and how they conduct themselves.

This complacency will continue to promote groundsmen as grass cutters and not sports turf managers. The same applies to how you manage your resources and equipment. Keeping the equipment clean and operational promotes a positive image.

Derek's other concern is the number of fixtures now being played by county cricket clubs. This year alone he had to accommodate over 21 first eleven days cricket before the end of May.

With England's success in the recent Ashes series, cricket is no doubt going to be a growth sport. Derek wonders what support the clubs will have in providing safe and consistent pitches!

Derek will be taking with him many fond memories of his time spent in the sports turf industry. The one thing he will miss more than any other is the peace and tranquillity he found when sitting on a triple mower mowing the outfield on a glorious summers day.

I am sure the people at Aberdeen and Sussex cricket clubs have their own fond memories of their association with Derek Traill.

Derek takes up his new post in Houston, Texas on Monday October the 3rd.