Climate change and the need for speed have proved key drivers for a Dutch engineer who has devoted much of his working life to easing tasks for groundscare professionals. So, next time the Verti-Drain comes out for duty, think of Marinus Reincke. His creative engineering skills have helped fashion this iconic aid to turfcare into almost the industry equivalent of the Hoover. 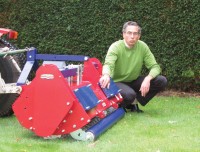 Is it too early to be making such comparisons? Not if the terminology of groundscare professionals is any yardstick.
Tom James reports

Verti-Draining is what greenkeepers and other grounds maintenance staff refer to habitually when they seek to relieve compaction and improve damage and root development.

The founder and director of Maredo BV Machine Designs, Marinus Reincke has worked in the turfcare sector since the 1980s, amassing a generation of experience designing equipment and machinery to address some of the key issues affecting the industry.

As a designer, he sees himself well positioned to continue creating and developing bespoke lines for the burgeoning turf maintenance market.
"I have always been interested in turfcare products, both from the viewpoint of the designer and from the customer as I operate and drive machines myself," says Marinus.

"For me, this is the ideal combination - knowing how machines work from a technical viewpoint as well as how they feel out in the field."
Marinus has gained his in-depth knowledge by working for pioneering firms committed to bringing leading-edge products to market and recalls how he first became involved in machine design.

"I had joined the De Ridder contracting firm in the early 1980s and was working there when the Verti-Drain concept was born. After completing my engineering degree, Redexim BV then invited me to join them in 1985."

Some of the most widely-used machines in the business are due, in part, to his designs and persistent desire to innovate and to create products that the industry really needed.

The programme of refining and redeveloping machines continued apace and, from 1997 to 2002, he worked on upgrading the Verti-Drain range. Then, after Redexim bought out Charterhouse, he began upgrading the original Charterhouse line, he explains.

"When the Verti-Drain was first unveiled it was one of a kind. It has revolutionised the industry since then," he states unequivocally. "The Verti-Seed offered similar levels of innovation, because it was a completely new way to overseed greens," he adds.

The formative years
Originally the family-owned Dutch contractor De Ridder was focusing on treating waterlogged pitches as far back as the late 1970s. The usual method had been to walk across a pitch with a fork. The contractor adapted spade diggers as deep-tine aerators to improve drainage.

He later led the design team, looking at the original design of the Verti-Drain, which was still an old fashioned, slow machine and, realising that it could be streamlined, made it operate more smoothly. Several models developed from the team work, after refining the original design to become a medium deep-tining machine.

By 2002 Marinus had decided to face a new challenge. His vision then focused on specialist attachments to use on existing mowers.
He left Redexim and started his own company, Maredot to develop these specialist mower tools, but remained the external engineer for Redexim at the same time.

Meanwhile, Redexim preferred to concentrate on what they know - tractor mounted and trail engine-driven machines. Links with Reincke persist. He still works with Redexim on machine design in specialist areas.

Like many a defining product, the Verti-Drain remains in high demand, after all the years. Even after many years in use they are still very attractive as used machines, and can be traded in against a new one.

So Reincke keeps his hand in at the larger end of the market, as well as the smaller applications, which perhaps says a lot for his need for his design flair to be expressed.

Marinus is a creative engineer who believes in putting his money where his mouth is by designing, building and selling machines. What took a greenkeeper two days to do (with the greens closed to play) modern machines allow them to complete in six hours - that's progress.

Creative minds
Creative minds often require an 'open field' in which to conceive so, in some ways, it was no surprise that, after seventeen years of designing machines for larger companies, Marinus felt the time was right to branch out on his own and continue his work under a new and independent guise. 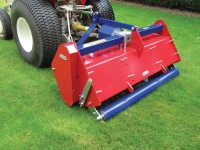 "When I decided to set up my own company in 2002, I wanted to follow a similar path to the one I had followed in designing machines like the Verti-Drain and the Verti-Seed" said Mairinus. "But I wanted to stay away from what was already on the market, instead attempting to design machines in a better, more innovative, way. The emphasis was to develop fresh ways of making turfcare easier, better and more efficient."

In a bid to do that, he has embarked on a three-pronged programme of development. "First is our own self-propelled machine, to which you can quickly attach different types of cassettes, allowing it to become an edger, scarifier, spiker, corer, sweeper or an overseeder. The thinking behind it is simple; it means the customer does not have to buy dedicated self-propelled machines for each of these jobs. Bowling greens, cricket clubs, golf courses and private gardens are the main target."

The second arm of the programme involves using the same cassettes but attached to triplex greensmowers. "By doing this we can increase the capacity at bigger golf courses and offer a scarifier, spiker, corer, sweeper, smoother and overseeder," he explains.

Tractor tools form the third strand of development. "Using the same technique, we adapted them into larger, heavier units, making the machines go deeper or faster. Our latest unit is the new tractor spiker with a working width of 1.30m and depth of 110mm."

The difference with this product, is that it uses a unique camshaft inside the spikers, which make the spikes vibrate and penetrate the soil more easily and to a greater depth.

Marinus is clearly in no mood to rest on his laurels and sees the future as one that will continue to push the boundaries in machine design.

"Our design work will continue at speed as there is always need for new products. The styles of machines differ from country to country and it looks like this difference will become greater as we see the impact of world climate change unfolding. Greenkeepers and groundsmen are facing a challenge to fight the problems that especially wet weather causes to ground care," he says. "Turf is becoming more vulnerable, so we need to find other products that are better equipped at trying to maintain turf to a higher standard within the same time frame."

Seeds of an idea
"New grasses will be developed that need less maintenance," says Marinus "because everything comes down to cost and, the more we mow, scarify and aerate, the greater that outlay. So, I believe that the demand for newer grasses is huge. But, seed needs to be seeded, to risk stating the obvious and, since the seed may be (or already is) expensive, an efficient process of overseeding is required - one reason for developing the Vibe®-Seeder."
"Kingsbarn Golf Course in Scotland is currently using our seeder heads on their greensmower for overseeding, so the technology is moving out into the field." 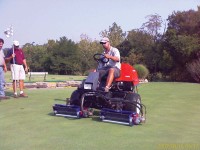 Clive Nottingham, Managing Director of Maredo's UK distributors, Lloyds of Letchworth, said "Kingsbarn chose the machine because they wanted a quick, efficient method of overseeding. The benefit of the machines, for which there are other attachments including aeration, is that greenkeepers can carry out maintenance at speed, rather than using a tractor-mounted machine, reducing the risk of compacting the green, while at the same time relieving compaction."

"The need exists to perform the required maintenance with more efficient machines. I believe Maredo has a role to play here too," says Marinus. "We have to think about our current maintenance machines and upgrade them to the next level. The Vibe®-Spiker has been developed for this purpose. Slitters have been available for decades but are limited in depth, because of their geometry. By adding a vibration to the spikes, the capacity and working depth increases."

"The machine itself is lighter so groundscare professionals can use a smaller tractor. The best comparison is the electric hand drill machine. Before vibration was applied, the drill could only bore small holes into concrete with difficulty. By applying vibration, the job became so much easier."

"Reducing maintenance costs can be achieved in another way too. When a golf course wants greens with a stimp of between eight and ten, they have to be cut very short almost daily."

"Some courses are looking at mowing less and at a higher cut height (much healthier for the grass, incidentally) but need other machines to guarantee the stimp speed. A unit such as the Vibe®-Smoothener fits that model and irons the green in a novel way that increases the speed while allowing a higher sward height."

"Capacity is another issue that will grow increasingly important. To reduce turf maintenance costs, productivity has to rise. Some machines have reached the limit of their productivity and the only way to overcome this, I believe, is by redeveloping current maintenance machines."
"There's a move away from single-purpose machines to professional multi-use ones, which offer a host of other advantages."