Size of telephone box, coffin thought to be 4,000 years old and includes well-preserved axe among remains. The coffin containing the remains of a man and a perfectly preserved axe, were found by chance during works at Tetney golf course. 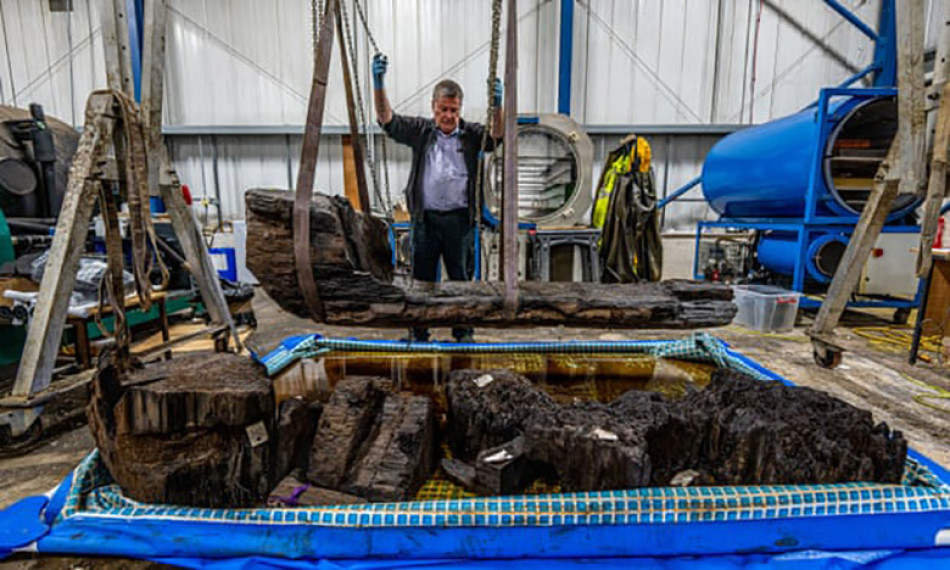 The coffin containing the remains of a man and a perfectly preserved axe, were found by chance during works at Tetney golf course. Photograph: Charlotte Graham

Golfers are forever trying to avoid everything from bunkers, the rough and water to other players' putting lines. In Lincolnshire the hazard was almost an incredibly rare telephone box-sized early bronze age coffin.

Historic England on Friday revealed details of a remarkable discovery as works were being carried out on a golf course pond in July 2018, during a spell of hot weather.

The log coffin, which measures about 3 metres long by 1 metre, is thought to be 4,000 years old. Inside are the remains of a man, who was buried with an axe.

Archaeologists have established that the coffin was made from hollowing out an oak tree trunk. Plants were then used to cushion the body and a gravel mound was raised over the grave - practices that were only afforded to people with high status in bronze age society.

Once the coffin was exposed there was a race to prevent its rapid deterioration. Fortunately, there were archaeologists in the area.

Dr Hugh Wilmott, senior lecturer in European historical archaeology at the University of Sheffield, said: "Luckily when the burial was found, myself and a team of staff and students from the department of archaeology were working on a nearby research and training excavation.

"This was a brilliant learning experience for our students to see what can be achieved at short notice and I'm so pleased we were able to help." 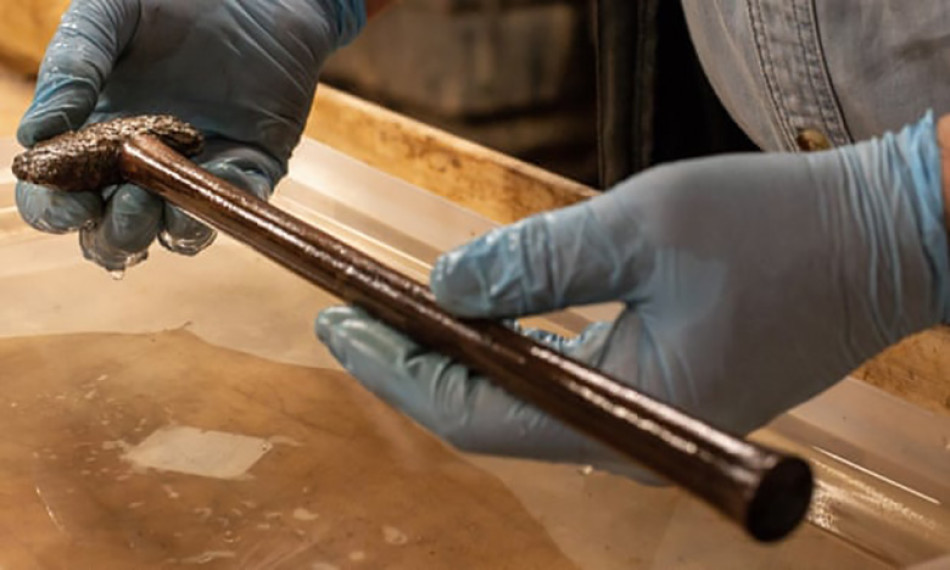 The axe is an extremely rare find, especially because its wooden haft survives as well as its stone head. Photograph: Charlotte Graham

The axe is an extremely rare find, especially because its wooden haft survives as well as its stone head. It is only one of only 12 known to have been discovered in Britain and archaeologists think it was more a symbol of authority than a practical tool.

The coffin is one of about 65 that are known from Britain. After a year in cold storage it was moved to York Archaeological Trust, where it continues to undergo preservation work.

Ian Panter, head of conservation at the trust, said his team had expertise in the conservation of waterlogged finds: "We hope to preserve the axe within 12 months but the coffin, due to its size, will take at least two years to fully treat."

Once that is complete, the coffin will move to the Collection Museum in Lincoln.

Lindsey Cawrey, executive councillor for culture at Lincolnshire county council, said it "such an exciting find" for the county and that she could not wait to see it in the museum's collection.

She added: "The preservation of the axe and handle, and the coffin timbers, is astonishing, and we're looking forward to being able to share the story of the discovery, and the results of the scientific analysis, with researchers and visitors to the museum when the finds are conserved and ready to come to Lincoln. We'll be able to provide access to these important finds for future generations."

The work to preserve the coffin, to prevent it crumbling after it was exposed to sun and air, has been supported by almost £70,000 of grant funding from Historic England.

The coffin was discovered at Tetney golf club near Grimsby. The club's owner, Mark Casswell, said his family had farmed there for years before opening the golf course.

"I'd never have imagined that there was a whole other world buried under the fields," he said. "It's amazing how well preserved the axe is with its handle still there like it was made yesterday. We'll have a nice photograph of it up on the clubhouse wall."