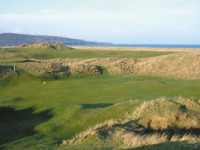 Laid out in 1891 by pioneering designer Willie Campbell, and respected among golfing cognoscenti, The Machrie on the Isle of Islay is regarded as one of the world's top links courses.

When Campbell first saw the land being proposed for the course, he said it was "the best ground for a golf course that I have ever had the pleasure of viewing." In fact, apart from some minor modifications, this challenging course has changed little in over 100 years.

Head Greenkeeper, Simon Freeman, suggests that you don't have to trust the experts when it comes to sustainability.

It's all well and good all this sustainable greenkeeping stuff, isn't it. The greenkeeping press has been awash with it for the last couple of years, with countless experts churning out endless scripts about how we should all be promoting the growth of fescues and bents and following a greener approach to greenkeeping that will stand us in good stead when the day of reckoning arrives and the nasty people at the big, bad E.U. take all our insecticides and fungicides away from us.

It's alright for them though, isn't it - they don't have 1000 manic members breathing down their necks, asking for summer maintenance practises to be carried on right through the winter and demanding the kind of ever-increasing green speeds that force us to maintain our surfaces at a cutting height that ensures that poa annua will inevitably dominate our swards.

Surely, the pressure put on us by these members - our employers - makes it literally impossible for most of us to choose a sustainable path, even if we wanted to. After all, many of us will have been in the industry long enough to remember Greenkeepers who stringently followed the teachings of the great Jim Arthur, refusing to overfeed or irrigate their greens, refusing to cut below 5mm in order to pander to the so called 'preferential' grass species, only to be handed their P45s by exasperated committees who could not understand why they couldn't have the billiard table greens they might have seen at the club down the road.

And yet now it appears that, 20 years or so down the line, we almost find ourselves in a similar position, one where central government, rather than a fire-breathing agronomist from Devon, is trying to force us down the same apparently disappointing route, threatening to take away the tools of our trade to such an extent that we will never again be able to produce surfaces to match those of the "halcyon days between 2000 and 2010".

The difference this time, of course, is that it appears we are not going to have much choice, for once this forecasted legislation comes in it will force our hand to such an extent that we are going to have to come to rely on grasses that can survive with drastically reduced inputs of nitrogen fertiliser (which may well, at some point, be taxed to the extent that its use will almost become prohibitive), and are resistant to the diseases that today we take for granted that we can control with fungicides. 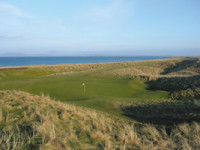 This picture would appear to be pretty bleak. Or is it? Is it possible that, if we took a step back and actually thought about this, it might be possible for us to use this situation to our advantage, to actually make our lives as greenkeepers easier? Do you think it might be feasible, for instance, to persuade our members that, if they stick with us in the short term, and accepted that their greens were

going to run a foot slower during the summer, that they could play all year round on greens that putt well and require very little in the way of remedial action. After all, aren't these same members always telling us that that's how the greens used to be in the "old days"?

Might we discover that the average golfer actually cares very little about how fast the greens are (up to a point, of course), but gets very miffed indeed when we tear seven bells out of them in October in an effort to remove the thatch built up by the very presence of the grass we are promoting through our aggressive quest for that elusive six inches of pace (the pace that Mister Average cares about so little) leaving them virtually unputtable right through the winter and, in some cases, into early May.

Is it any surpise that members complain about the price of their 'annual' subscription, when they have to put up with aggressive aeration techniques that effectively mean they can only really play for seven months of the year?

Of course, that's easy for me to say, isn't it? I work on a relatively underplayed, free-draining links that is blessed with a biologically active, alkaline rootzone. I don't have to aerate much (in fact I sometimes have to fight my natural inclination to overwork my rootzone), and yet my fescue-dominated greens still putt relatively fast and true all year round even though it appears that I am actually having to put in very little effort to make them work for me.

Would I be so quick to comment if I worked on a heavily played inland course with 15 year old USGA spec greens that were so bacterially sterile that they had a total inability to break down thatch without the regular help of a hollow corer and an aggressive set of verticut units? Probably not.

But this very argument hints at what I believe the problem to be with all this sustainability stuff; that it suffers from the same intrinsic problems that have plagued every other greenkeeping fad over the last 100 years - that every golf course has different surroundings, different soils, different levels of play, and therefore every course needs to be maintained in a different way.

That seems so obvious and yet not once have I ever read anything written by Jim Arthur, or many other experts for that matter (even from today's most eminent agronomists), that admits that not every golf course can achieve the same goals and outcomes using the latest programme or the latest innovation.

While it may be perfectly reasonable, and extremely beneficial, for me to follow the current vogue of minimal disturbance in order to maximise my potential to grow fescue dominated greens that will be so easy to look after that, eventually, all I will have to do is go out and cut the grass, what would happen to the greenkeeper with the 15 year old USGA spec greens I mentioned earlier if he went blindly down this road?

His thatch layer would surely overpower his greens, leaving them breathless and lifeless; a sulphurous, hydrophobic, meadow-grass dominated swamp. And then he would get the sack. Surely it would be wiser if he were to continue to aerate and verticut, removing as much decaying organic matter as possible, while simultaneously looking at products and nutrients that might enrich his soil sufficiently to allow his greens to work for him in the future rather than against him. 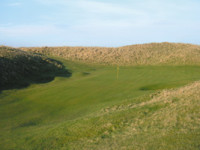 Once he has done that, then, and only then, can he begin to introduce perennial grasses with slower growth patterns and lower thatch building properties, in order that he might then cut back on his vigorous use of cultural thatch-removal practises.

He may then decide that, even having reached that advanced stage of remedial action, all he can hope for is a strong, healthy, bent-poa mix, as wear patterns, soil characteristics, and even the very pressures of his job may force him to accept that he is never, in a million years, going to be able to introduce and sustain the growth of fescue in his greens.

Surely, he should be applauded for doing his homework and figuring out the course of action that best serves the needs of his employers, rather than being lambasted by so-called experts for not following a path that would ultimately lead to folly?

I do believe there is a sustainable path that can be followed for the benefit of every golf course, but I also believe that there is only one person who can decide what that path is. And that is the Greenkeeper at that club. He, or indeed she, is surely employed to make the decision on how best to move the course forward, using the huge array of information and products now available to help all of us to formulate our plans.

Surely, there is nothing wrong with trying absolutely anything that might help us to achieve our goal of stronger, more self sufficient greens, regardless of how much it might have made the great Mr. Arthur shake with rage!

Get a soil analysis test done, study the results, ask for advice, experiment with whatever products those results appear to suggest you could use to compensate for anomalies in your rootzone and, if that doesn't work, experiment again. Be open to new ideas, evaluate them in your own head, and make up your own mind whether there is a place for these new ideas and products in your programme.

And think about cutting heights, and how easy it would be to maintan your greens if you could get away with cutting a millimetre, or even half a millimetre higher all year round. You would use less nutrients, you'd get less disease, your overseedings would be more successful, your machines would cause less wear on the edges and the high spots, and your water usage would go down.

And, most of all, communicate with your employers and members. Tell them what you plan to do, and why they might have to suffer a little in the short term while you do it. Let them know your fears for the future, and what advantages they may enjoy in the long term if they trust you to do the right thing now.

If ultimate sustainability on our specific site is our goal, whether that goal be minimal inputs and disturbance on an underplayed, fertile links like Machrie, or whether it be an improved, "puttable, all-year-round" surface which is less susceptible to disease and thatch build-up at the course with the swampy 15 year old USGA spec greens, we need to get together with our employers and work out, and document, in which direction they wish the club to go over the next 5, 10, or even 20 years.

We need to work with, not against, our committees and memberships to come up with a strategy that will enable us to produce a golf course strong and healthy enough to withstand the worst that the beaurocrats can throw at us. And if, in our own particular instance that means a poa-bent mix rather than fescue, or more aeration rather than less, or (perish the very heinous thought) eight and a half feet in the Summer instead of ten, then please let us carefully and sensibly work this out for ourselves rather than just blindly following the latest fad or theory. Only then will we be able to work towards a sustainable future for 'our' golf course.