A pledge by Devon County Council to protect bees from harmful pesticides on council land has been warmly welcomed by Friends of the Earth, the Devon Wildlife Trust and Buglife South West 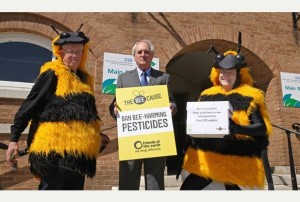 The organisations had handed in a petition to Devon County Council leader John Hart of over 3,700 Devon residents calling on the council to ban neonicotinoid pesticides on its land.

Council officers will now explore the practicalities of implementing a ban, including which parts of the council's estate it can apply to.

Mike Birkin, Friends of the Earth South West campaigner said: "We're delighted that Devon County Council is committed to preventing bee-harming pesticides from being used on council-owned land. We hope other councils will now follow their lead.

"There is growing evidence of the threat neonicotinoids pose to bees - Devon rightly recognises that more can be done to protect these threatened pollinators that work so hard in our parks, gardens and countryside."

Devon Wildlife Trust spokesman Dan Smith said: "Devon County Council's leadership on this issue is welcome news for Devon's bees and other wildlife. The Council's decision should benefit pollinating insects in many Devon parks, school grounds and thousands of miles of roadside verges.

"But, just as importantly, the commitment shown by the Council sends a clear message to other decision-makers that action can be taken to reverse the decline of our wildlife."

Andrew Whitehouse, Buglife South West Manager said: "This is fantastic news. We are encouraged that Devon County Council has listened to our concerns, and the concerns of everyone who signed the petition.

"By banning the use of neonicotinoid pesticides, Devon County Council are be showing great leadership in helping our beleaguered bees and other pollinators, and we hope other councils will follow."

Devon WI was also part of a coalition of groups calling on the council to ban neonicotinoid pesticides on council-owned land.

Further consideration will be needed on how neonicotinoid pesticides can be eliminated from the County Farms Estate, where the council may not have the power to impose a ban - but campaigners expect a complete prohibition on the rest of the council's land, including its country parks and nature reserves.

For the original article, visit www.exeterexpressandecho.co.uk.