With the clocks now returning to British winter time, renovation programmes on cricket squares should by now have been completed. Warm day time temperatures early in October will certainly have helped in getting germination on the square.

Although, where there may be a few bare areas on the square where seed germination may have been slow to respond, the use of germination sheets should help encourage recovery as the temperature falls. Turf disease can also become quite prevalent this time of the year, when soil moisture levels increase, coupled with the presence of early morning dews.

The combination of moist soils and surface moisture on the leaf blade can increase the likelihood of disease attack. Aeration of the square is vitally important, but often delayed until November, allowing the chance for the square to retain more moisture.

Be careful with the use of covers as there maybe a risk of encouraging disease. Removing the covers during the day will minimise the risk, spray with a fungicide if disease is spotted.

Regular brushing in the mornings to remove the dew from the playing surfaces will reduce this risk. Diseases commonly active at this time of the year are fairy rings and red thread.

Continue mowing the out field whilst growth is present. Have your machinery booked in for an overhaul and service.

Where there's moisture moss will lurk. Moss spores could develop on the square as the weather closes in and air temperatures drop. The use of an approved moss killer will check any growth quickly.

Worm and moss activity can also be prevalent in November; keep an eye on the square and treat accordingly.

Sarrel roll your square to keep surface moisture to a minimum. Leaf collecting from area's of the outfield. 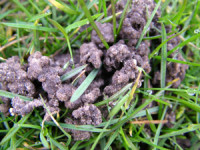 Worm treatments can be carried out if needed, but please remember to ask yourself why worms are present. Ph level are usually the main factor but, organic matter and your cultural practices on the square need to be assessed. Carbendazim is now the only active ingredient available for controlling worms.

Mowing frequencies during the winter months are dependent on the need and condition of the ground. It is important to maintain a constant height of cut, on both the square and outfield.
The square should be maintained between 12-20mm with the outfield maintained at between 25-35mm.

Remember; the outfield too has a major effect on a game if unattended. The outfield should be treated through the winter the same as any other natural grass surface - aeration, fertilising and mowing should not be neglected.

Aeration of the square is often delayed until November. Aerating when the square is dry can lead to problems of root break. Ideally, you need moist conditions to enable good penetration with the aid of solid tines. Sarrel roll your square to keep surface moisture to a minimum. 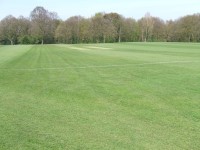 Too many clubs tend to neglect their outfields, it is important to undertake some work on the cricket outfields as they are an important part of the game, they need to be firm, flat and free from weeds. Some cricket outfields are often maintained as winter pitches, and the amount of work carried out may be determined by whether the outfield is being used for other sports (football/rugby).

Ideally, on the outfields, aeration penetration should be down to a depth around 200mm to promote deeper rooting. Some groundsmen like to carry out a programme of hollow coring which again increases porosity and can also help to redistribute/recycle topsoil which, in turn, helps restore levels. The frequency of aeration activities will often depend on the resources - money, machinery and time - available.

In the main you should be looking to aerate throughout the winter period on a monthly basis, weather and soil conditions permitting.

Some cricket grounds may have a number of mature deciduous trees nearby, which will inevitably lead to some amounts of leaf debris lying on the square and outfield. It is essential to remove leaves from the square. If left to accumulate these leaves will become wet, that, in turn, will restrict light and air being available to the grass plant, thus putting the grass under stress and resulting in it turning yellow and then decaying. Vacuum, sweep or rake up leaves on a regular basis.

Turf disease can be quite prevalent in October when soil moisture levels increase, coupled with the presence of early morning dews. The combination of moist soils and surface moisture on the leaf blade can increase the susceptibility of disease attack. Regular brushing in the mornings to remove the dew from the playing surfaces will reduce the likelihood of disease outbreak. Many turf grass diseases can be active at this time of the year - fairy rings, red thread and Fusarium are the most commonly seen. 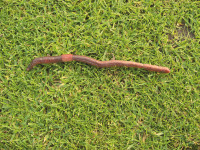 Worms can also be active this month. Keep an eye the square and treat accordingly. Worm treatments can be carried out if needed, but please remember to ask yourself why worms are present. Ph level, organic matter and your cultural practices on the square may need to be assessed. Carbendazim is now the only active ingredient available for controlling worms.