A cold northerly wind at the beginning of the month, with overnight frosts. Changeable throughout.

Mowing frequencies during the winter months are dependent on the need and condition of the ground. It is important to maintain a constant HOC on both the square and outfield. The square should be maintained between 15-20mm with the outfield maintained at between 25-35mm.

Aeration of the square is often delayed until mid or end of November. Aerating when the square is too dry can lead to problems of root break. Ideally, you need moist soil conditions of around 75 -100mm to enable good penetration with the aid of solid tines. Most areas of the country will be ok following all the rain brought in by those storms in October. Sarrel roll your square to keep the surface open and surface moisture to a minimum.

Too many clubs tend to neglect their outfields, it is important to undertake some work on the cricket outfields as they are an important part of the game, they need to be firm, flat and free from weeds. Some cricket outfields are often maintained as winter sports pitches, and the amount of work carried out may be determined by whether the outfield is being used for other sports (football/rugby).

Ideally, on the outfields, aeration should penetrate to a depth around 150 to 200mm to promote deeper rooting. This can be achieved by deep slitting or solid tining. Some groundsmen like to carry out a programme of hollow coring, which again increases porosity and can also help to redistribute/recycle topsoil and which, in turn, helps restore levels. The frequency of aeration activities will often depend on the resources - money, machinery and time - available. In the main, you should be looking to aerate throughout the winter period on a monthly basis, weather and soil conditions permitting.

Some cricket grounds may have a number of mature deciduous trees nearby, which will inevitably lead to some amounts of leaf debris lying on the square and outfield. It is essential to remove leaves from the square. If left to accumulate, these leaves will become wet and which, in turn, will restrict light and air being available to the grass plant, thus putting the grass under stress and resulting in it turning yellow and then decaying. Vacuum, sweep or rake up leaves on a regular basis.

A generally mild October with good growing conditions has provided opportunity for continued recovery across many areas of the country, especially in the north and west of the British isles. Speaking to turf managers across the south and east, comparably lower rainfall in some areas has resulted in stalled recovery from summer drought stress. Maximising any rainfall via the use of penetrant wetting agents and aeration will assist the rehydration process; something which needs to be encouraged before cold temperatures eliminate opportunities for growth.

With that in mind, the forecast for November is for periods of stormy and wet weather interspersed with drier spells and crucially, with respects to turf management, below average temperatures.

As always then, prior preparation with a mindset to wards proactively making use of favourable windows are key considerations. 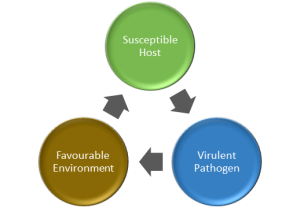 Disease incidence can be correlated with the factors in the disease triangle. All three factors are required to coincide for an outbreak of disease. The major pathogen on turf surfaces throughout November will be Microdochium nivale.

Consideration of the contributing factors

Providing the plant with calcium, silicon and phosphite strengthens the cell walls and helps the plant to resist attack without resorting to chemicals. Applying plant beneficial biostimulants such as seaweed and carbon energy when conditions favour the plant primes its metabolic defence responses and assist’s beneficial microorganism’s to help repel the disease.

Nutritional requirements will be aligned with growth, put simply the more growth the more nutrition required. Typically fertilisers applied during renovation operations should see the majority of surfaces through November and into December. As a result NPK applications will be limited however, targeted application of secondary macronutrients and micronutrients to elicit plant responses such as those outlined above with calcium will bring tangible benefits.

Maintaining appropriate water air ration is a key factor in reducing turf stress during periods of the year where rainfall increases and drying opportunities are reduced. Little and often aeration via methods such as star tineing and sarel rolling facilitate diffusion of oxygen into the profile and carbon dioxide out. This allows the plant roots and beneficial soil microorganisms to breath which reduces plant stress and sustains their population numbers respectively.

Maintaining water percolation into deeper aeration channels and drainage systems via the application of penetrant wetting agents reduces the tendency of water to be held at the surface where it acts as a barrier to gas exchange and increases localised relative humidity. Something which helps fungal diseases to grow and spread.

Regular applications of products containing sulphur will acidify the local soil surface environment and discourage worms from casting. Avoid regular products containing iron which is not in a liquid chelated form as this will quickly oxidize and build up in the soil chemistry causing numerous problems such as reduced pH, iron panning, nutrient lock up and inhibition of microorganisms.

Servicing time, so get your machinery booked in.

Store away all other equipment in a dry area; cold and damp conditions can do a lot of damage.

We are pleased to announce the launch of our new Grounds Training website, together with our new suite of online courses

There are two courses - Spring & Summer Maintenance and Autumn & Winter Renovations. New dates are currently being planned – Email Carol Smith using the below link to register your interest.

Each of the courses is also available in an ONLINE format. The Lantra accredited course in Cricket Pitch Maintenance is a series of training videos, each followed by multi-choice questions and answers. In addition to the videos, the accompanying comprehensive Course Manual is also included. There is a choice of courses - Spring & Summer and Autumn & Winter - more information.

Now you can learn about how to maintain a cricket pitch in the comfort of your own home and in your own time. This newly developed course covers Spring & Summer Maintenance and consists of a number of videos with assessment questions, and an accompanying hard copy Course Manual. The Online Course is Lantra accredited and provides you with all the basic knowledge required to maintain a cricket pitch over the period stated. There is also the option of attending a one day practical course.

Pitchcare is the only provider of LANTRA accredited training courses in the maintenance of a Cricket Pitch.

We will also be running our regular one and two day courses at various venues during the year.

Delegates attending the courses and using the accompanying manuals will be able to develop their own skills, working knowledge and expertise, by understanding the method of instruction and the maintenance principles they set out. Included in the Course Manuals are working diaries showing the range of tasks needed to be accomplished each month.

Structures: Check and repair fences, scoreboards, covers and sightscreens. Finish off any painting that may have been delayed due to bad weather.

Other work to consider:-