A continuation of February's unsettled weather is forecast, with western areas getting more of the rain. 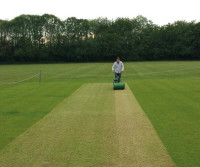 With the recent appalling weather conditions, the advice is to be patient - keep off the square if it is waterlogged or, possibly, frozen. Rolling and general pre-season maintenance tasks will need to be put on hold.

The following advice should be applied once weather conditions are favourable.

Regular brushing in the mornings to remove the dew from the playing surfaces will reduce the likelihood of disease outbreak.

Check all machinery has been serviced and sharpened ready for use. Give the square a light verti-cut and mow at 15-18mm to encourage sward density. As soon as possible, the square must be "squared off". Carry out renovation to bare areas such as ends and foot holes.

Start pre- season rolling if not already done so.

Outfields will also need some attention, with a light harrow, mowing at 25mm and aerating.

Check sight screens and covers are in good condition.

Keep records of work carried out, such as core samples, mowing and rolling.

Re-commission your irrigation systems and check you have not had any frost damage. 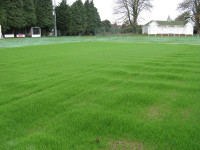 As soon as possible, the square must be "squared off". By using semi-permanent markings, this operation can be made very simple using the 3, 4, 5 system to produce your right angles. Fixed plastic points pushed into the ground on the four corners are valuable in marking the correct position of the square. These are sunk slightly below the surface to ensure no damage to machinery is incurred. As an addition, a fixed point for the stump line and return crease is also extremely useful. This can provide accurate measurement from stump to stump (22yds). It is advisable to spend time getting your square absolutely correct; it will save time in the future.

Continue brushing on a daily basis to remove moisture from the grass surface; this will allow for a much better standard of cut. Light scarification or verticutting can be carried out at fortnightly intervals pre-season. Removing horizontal and stoloniferous growing grasses and surface organic matter is always beneficial for the onset of pitch preparation; together with brushing, this will improve your quality of cut.

The mowing height should be lowered to around 15-18mm by the end of the month. Remember not to remove more than 2/3 of total grass height in each cut. The less stress that is placed on the grass at this vital time the better the results further on into the season.

Seeding of the ends with a perennial rye grass, where the grass is weak, sparse or bare can be undertaken as the rise in temperature along with sheets will help germination. Remove the sheets regularly to check for diseases. Remember that without good seed to soil contact, the operation is useless. The use of perennial rye grass is ideal for this. With its fineness of leaf, it combines superb close mowing with excellent wear tolerances and high quality aesthetics, is shade tolerant, fast establishing and produces very little thatch.

Fertiliser treatment and turf tonic can be continued in accordance with your annual programme. Ideally, get your soil sampled for nutrients, organic matter content and soil pH. This information will help decide on the appropriate course of action with regard to applying the correct NPK balance for your site. If you haven't got a fertiliser programme, then get your soil tested soon. To help kick start the grass into growing, you can begin to apply some low Nitrogen based fertilisers. 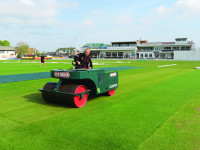 It is important to start your pre season rolling programme, subject to the surface conditions. Firstly, you need to ensure you can get the roller on to the square without doing any damage to the outfield. The square needs to be in a condition whereby the surface is dry but, when you press down with your thumb, some moisture is felt on the skin. This is a good indicator of when you can start your rolling. Gradually build up the rolling weight as described in February’s Diary:

If you are using the weight of a mower to consolidate the ground, disengage the blades to reduce friction and unnecessary wear on the machine. Using the “Union Flag” system, roll in as many different directions as possible, but always finish in the direction of play. Timing of this operation is vitally important. Gradually build up the rolling weight by moving onto the next size of cylinder mower and adding weights to the grass box as required.  Allow time for the soils to dry before proceeding with the next roll. This gradual build up may be over a few weeks until, at the back end of the month, the roller (serviced and raring to go) should be coming out of the shed to get consolidation right for the start of the season. Ideal rolling conditions would suggest the soil be in a state of plasticity, or "plastercine" like. Consolidation is your main aim and the quality of pre-season rolling will show when you produce your early season pitches.

Pitches, where proper construction and gradual build up has taken place, are required to be consolidated throughout to a depth of no less than 100mm. This can only be achieved with gradual build up of roller weight, a constant speed over the whole square and measuring of soil density.  The maximum achievement for soil density is the function of its clay content. As the clay content increases, the soil density increases with compaction. Higher clay content pitches of 28- 35% require more intense working regimes.

No number of graphs of historical data, or TV news bulletins that feature wellie-clad reporters against a backdrop of rivers that have burst their banks, can portray what we’re experiencing at the moment. Saturated doesn’t cover it, and even as I sit writing this agronomic diary update, it is steadily raining.

Although the Blackthorn is blooming and the Hawthorn is starting to break its buds in the hedgerows, spring feels like it’s a long way away. Spring officially starts in three weeks’ time, although the adage not to ‘cast a clout till May is out’, referring to the Hawthorn blossom which typically occurs during the month of May, and which also gave rise to the playground nursery rhyme:

The nuts actually referring to ‘knots’: the May blossom which would have been gathered as part of the May Day celebrations - an expression of the evident joy and relief that late spring and early summer finally bring; when all this water will be a memory.

Research has shown that a series of complex chemical signals are triggered in plants as soon as it starts raining. Myc2 is a protein which, when activated, causes thousands of genes to spring into action to prepare the plant’s defences. These warning signals travel from leaf to leaf and induce a range of protective effects. Why would plants panic when it rains? Rain is the leading cause of disease spreading between plants.

When a raindrop splashes across a leaf, tiny droplets of water ricochet in all directions. These droplets can contain bacteria, viruses or fungal spores which have evolved to utilise this means of transmission to a new host. A single droplet can spread these up to 10 metres to surrounding plants. Evidence also suggests that when it rains, the same signals spreading across leaves are transmitted to nearby plants through the air.

One of the chemicals produced is a hormone called jasmonic acid that is used to send signals between plants. If a plant’s neighbours have their defence mechanisms turned on, they are less likely to spread disease, so it’s in their best interest to spread the warning to nearby plants. When danger occurs, plants are not able to move out of the way, so instead they rely on complex signalling systems to protect themselves (Moerkercke et al. 2019).

It’s a good time of the year to undertake training updates, and during a recent education session that was provided to some members of our internal teams, I was reminded that the most diverse ecosystem that exists is in the environment immediately around the plant’s root system. The impact upon playing surfaces, of the volumes of water that we’re experiencing, is as direct consequence of the affect that saturated soils have upon the plant’s capacity to cope with inundation.

Apart from increased levels of disease, the disruption caused to the plant in the form of appreciably reduced populations of micro and meso-organisms, apparent in the amount of worms floating about on the surface trying to obtain respite from a saturated environment.

This loss was written about in the December update which discusses the means to mitigate against damage and develop a strategy which can aid effective recovery, and is as relevant now as it was then. The importance of a well-structured substrate when it comes to water flow off the surface and into aquifers was highlighted for me on a weekend walk over the Shropshire Hills. The fields with standing water have been worked over the winter, this disruption to the existing soil structure has impaired field drainage whereas the surrounding permanent pasture has removed the water off the surface.

It would appear that the intervals, or opportunities to undertake the timely operations necessary to maintain sports surfaces to a good standard, appear to be diminishing – speaking to managers over the winter, for some renovations were incomplete or lacking at the end of the season and the start of this period is proving to be troublesome.

As I get older, I appreciate my capacity to forget, and I can say with confidence that once the sun shines and the grass is growing vigorously, thoughts of this water will evaporate and more pressing problems will emerge for our attention.

Grounds Training was established in 2006 to provide a complete and unique service delivery training courses for the sports turf industry. We are now the go-to provider for on-site, bespoke training for groups. Grounds Training also works with the industry’s awarding bodies – Lantra and City & Guilds (NPTC).

Our Online Sports turf maintenance courses  which are independently accredited by Lantra which are going from strength to strength. The video tutor is leading industry consultant, Alan Lewis MSc NDT FinstG. The course provides flexible, cost effective training and is accompanied by a comprehensive training manual. https://www.groundstraining.com/online-grounds-training-courses/

In addition we have  a wide range of ground care machinery courses, safe handling of pesticides, tree survey, and ecology courses. All our which are delivered by industry qualified instructors registered with  Lantra Awards and or NPTC.

We also offer a small number of open courses at our site at Allscott ,Telford.

All the courses we have to offer can be found by visiting https://www.groundstraining.com/

Here are our upcoming open courses:

Where to source professional fertilisers

Chemicals and their application