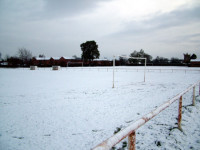 Winter weather has finally arrived with avengeance, many clubs up and down the country have no doubt been working hard to keep their pitches playable. Even some of the professional clubs have suffered from pitch postponements in recent weeks.

The recent heavy fall of snow has been a timely reminder of the winter weather we used to experience many years ago. Snow as deep as 100mm was seen on some local pitches in Shropshire.

There is not a lot you can do whilst the snow remains on the pitch, the problems often occur during the thawing, when the snow turns to water and generally saturates the playing surface. It is best to keep off playing surfaces during this time. Also playing on frosted surfaces can lead to turf damage once the pitch thaws out. The grass plant becomes bruised and is slow to recover.

Many football pitches up and down the country may well now be near to or reaching field capacity due to the heavy rain we have been experiencing. Pore spaces, particularly in soil dominant pitches, will be filled with water (saturated). Playing on saturated pitches will certainly result in surface damage. Soils, when saturated, lose their stability and strength. The action of players running, stopping, sliding and turning in studded/bladed boots will result in surface damage. The severity of the damage will be dependant upon the soil type and the ability of the top 100mm to drain quickly.

To help keep the top 100mm free draining a programme of surface aeration is necessary. This is achieved by regular spiking with solid/slit tines to a depth of 150mm or more when conditions allow. There are other specialist machines that can help with improving surface drainage, for example the Blec Groundbreaker and the versatile vertidrain machines that are now available. Frequency will be dependant on resources available, money/labour etc. Most league clubs will be aerating on a fortnight/monthly basis varying the depth of aeration.

However, care should be taken on the timing of aeration operations during the winter months. Getting on when the soil remains in a saturated state can do more harm than good. The following photograph clearly shows smearing damage to a pitch that has been spiked in wet conditions. 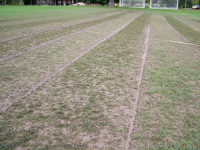